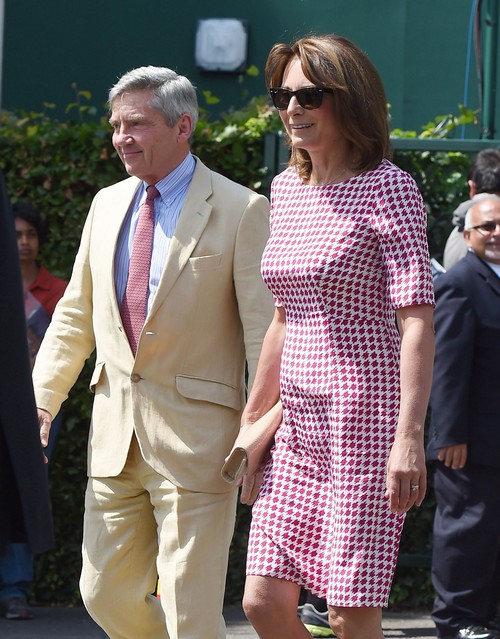 Prince William and Kate Middleton are allegedly caught up in the middle of an ugly divorce. The Royal couple’s marriage is not in trouble, however Kate’s parents Michael and Carole Middleton’s relationship is over and Prince William’s in-laws are on the verge of a messy $50 Million divorce, and they broke the news to Kate just days before the pregnant Duchess of Cambridge is set to give birth to her new baby girl.

The April 27th edition of GLOBE Magazine reveals that Michael and Carole Middleton’s marriage has been strained since Kate Middleton married in to the Royal Family, and a divorce is imminent. GLOBE explains, “Kate’s joy over her new baby has turned to heartbreak after learning her beloved parents Carole and Michael Middleton are virtually living separate lives and on the verge of an ugly $50 Million divorce. Ironically, insiders blame their daughter’s role as star attraction of the royal family for the wedge that has come between the common-born Middleton’s.”

What could Kate Middleton’s marriage have to do with her parents? Well, it’s no secret that since Kate became Prince William’s wife her mother Carole has been basically a third party in their relationship and refuses to leave Kate and Prince George’s side. Not only has her constant hovering rubbed Prince William’s family the wrong way, apparently Michael Middleton has had enough of it as well. The Middleton’s have a party supply business to run, and since Kate married Prince William he has been handling all of the burdens and responsibilities of the company himself because Carole has been MIA.

According to GLOBE’s insiders, the little bit of time that Carole does spend with Michael, she is a total diva and acts like she is the Queen of England. One source explained, “Kate’s position as a noble with the title of Duchess of Cambridge has gone to Carole’s head. She orders the staff around and she acts like royalty herself. Carole apparently drives Michael nuts with her pushy ways and she acts like a queen herself.”

GLOBE’s sources are just confirming what we have known all along – commoner Carole Middleton thinks that she is just as royal as her daughter Kate. At this point, who can blame Michael Middleton for wanting to divorce her? Do you think as their divorce gets ugly some of Kate’s family’s skeletons will be exposed? Will Carole officially move in with Kate and take over Amner Hall once she is no longer married to Michael? Let us know what you think in the comments below!