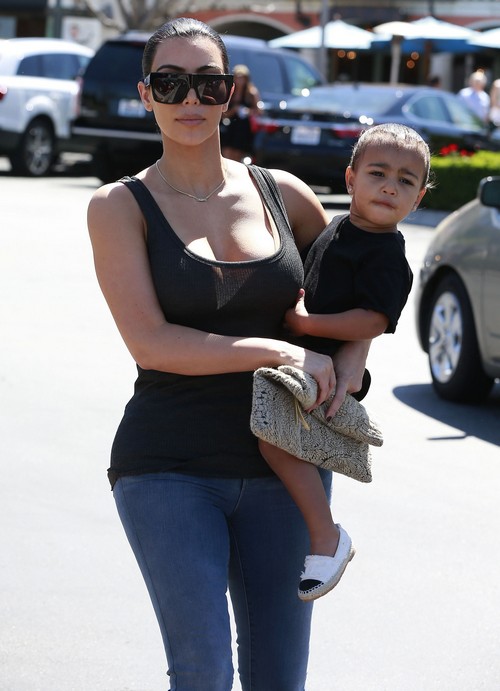 Who will get custody of North West? Kim Kardashian and Kanye West are just one scandal away from a divorce. Despite the fact that Kim is trying desperately to keep Kimye together for publicity, the rapper and his wife have been fighting over everything from her family’s reality TV show, his loose lips and cheating scandals, and now an alleged love child. Kim Kardashian’s brother Rob Kardashian hit the nail on the head when he said his sister is the “psycho bitch from Gone Girl,” and implied that she will stop at nothing to keep Kanye West in their fake marriage.

Despite the fact that Kim Kardashian is trying to keep her showmance with Kanye from falling apart and a divorce is on the horizon, she is also a realist. Kim knows that if she and the crazy rapper do get divorced she is going to have to fight tooth and nail for custody of her daughter North West – and she is already laying down the groundwork to build a case and make herself look like a super mom.

Kim Kardashian recently stepped out with North West in tow, and her nephew Mason for good measure – and took her daughter to her ballet class. The KUWTK star was photographed dressed down and casual – and except for her crop top, she could have almost passed as a suburban soccer mom. She toted North out of ballet class with Kourtney’s son Mason – and no nanny in sight. Yes, you heard us right, Kim Kardashian took care of not one, but two kids all by herself! Like we said, super mom.

Sources close to the Kardashian family snitched to CDL that Kim is trying to “mom up her image,” in case she and Kaye do divorce, so that she has a leg to stand on in a custody battle over North West. Really though, if you were a family court judge who would you choose to give custody of a toddler, Kim or Kanye? Isn’t that considered choosing the lesser of two evils? A crazy rapper who literally thinks he is Jesus and personal friends with President Obama, or a narcissist with nude pictures and sex tapes all over the internet? Who do you think will win a custody battle over North West? Let us know in the comment section below!

Kim Kardashian takes her daughter North to see the movie ‘Home’ in Calabasas, California on March 28, 2015. Kim was joined by her sister Kourtney and her kids Mason and Penelope. Kourtney, Mason and Penelope all wore matching striped shirts

Kim and Kourtney Kardashian take their daughters North and Penelope to a dance class in Tarzana, California on March 26, 2015.  FameFlynet

Reality star Kim Kardashian stops by Barry’s Bootcamp for a workout in Sherman Oaks, California on March 26, 2015. Earlier Kim and her sister Kourtney took their kids to a dance class.