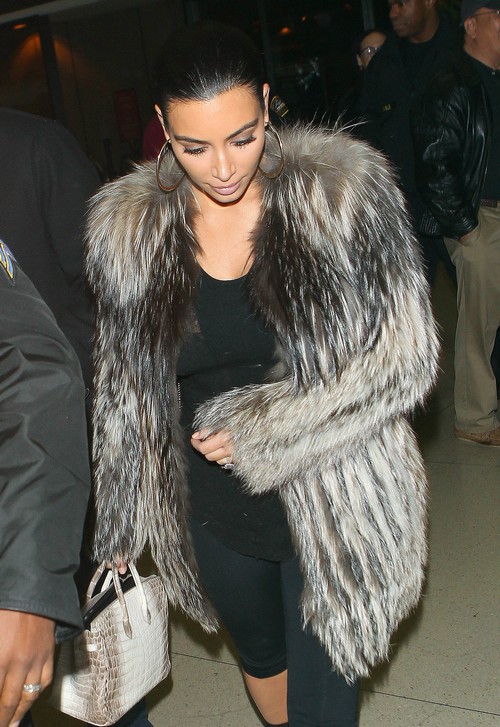 Kim Kardashian was embarrassed at the Grammy Awards by Kanye West’s rant praising Beyonce and demanding she get Beck’s ‘Album of the Year’ award. Oh, Kanye. Kanye West has pulled a Kanye West by humiliating himself at the Grammy Awards this year, although to him, he was just calling for justice. Always prone to ranting and raving, Kanye went on one of his longest rants ever at the Grammys this year, giving a long diatribe about how Beck should have given the ‘Album of the Year’ award to Beyonce. Kim Kardashian was standing next to him [which took place in the E! interview], and if Kim looks that uncomfortable standing next to you, you should know that you need to stop talking. But alas, it’s Kanye West. Kanye thinks that everything that comes out his mouth is a gem of wisdom, and all of us lowly underlings should listen and bow down before him.

Anyway, we’ll give you a part of his rant, including the part where he complains about Beyonce being disrespected by the Grammys because she didn’t win Album of the Year. He stated, “All I know is if the Grammys want real artists to keep coming back, they need to stop playing with us. We ain’t gonna play with them no more. ‘Flawless,’ Beyoncé video. Beck needs to respect artistry and he should have given his award to Beyoncé, and at this point, we tired of it.”

He continues making no sense for the rest of the rant, but he does mention something about how he’s fighting ‘for creativity’. There’s also something in there about his daughter, North West, and a clothing line, but really, is anybody able to make much sense of it?

I feel like whenever Kanye gives a rant, he just takes a jumble of thoughts out of his head and spurts them out in a long line of word vomit. Plus, he’s very clearly envious of Beyonce, almost to the point of being covetous. He’s done this sort of thing before, where he’s praised Beyonce as though she’s the second coming of Jesus. He claims that she’s the most talented person he knows, he’s willing to fight for her, and he’s willing to rant on live TV for her… I wonder how Kim Kardashian feels about this? It’s very possible that Kanye is just jealous that Jay-Z gets someone like Beyonce, who’s a ‘real artist’, where he gets stuck with a famewhore reality TV star who doesn’t have the slightest talent outside of the sex tape industry.

Reality star Kim Kardashian, her husband Kanye West and their daughter North catch a flight out of LAX Airport shortly after attending the Grammys on February 8, 2015 in Los Angeles, California. The pair shared their distaste of Beck beating out Beyonce for the Album of the Year award- Kim took a “shocked face” selfie with John Legend and Chrissy Teigen titled “This is the Beck won that award face?!?!?!,” while Kanye stormed the stage (again) during Beck’s acceptance speech. He later said, “I just know that the Grammys, if they want real artists to keep coming back, they need to stop playing with us,” he blasted. “We ain’t gonna play with them no more. And Beck needs to respect artistry and he should’ve given his award to Beyonce.” FameFlynet