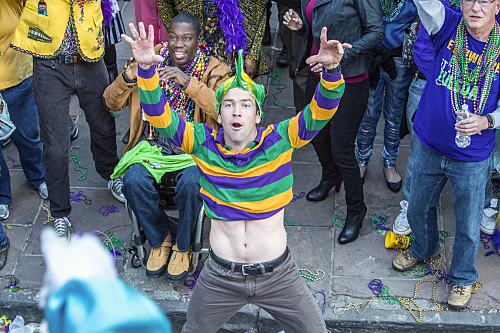 Tonight on CBS NCIS: New Orleans returns with an all new Tuesday February 17, season 1 episode 15 called, “Le Carnivale de la Mort” and we have your weekly recap below. On tonight’s episode, a Petty Officer is murdered during Mardi Gras, and the team investigates which parades and parties may have led to his death.

On the last episode an NCIS agent was killed during a security detail for the Vice Chief of Naval Operations. The investigation focused on whether it was an assassination attempt or if someone was targeting one of their own. Meanwhile, Brody was placed under investigation and her furtive past was reevaluated. Did you watch the last episode? If you missed it, we have a full and detailed recap right here for you.

On tonight’s episode as per the CBS synopsis, “A Petty Officer is murdered during Mardi Gras, and the team investigates which parades and parties may have led to his death. Meanwhile, Pride struggles to decide which aspects of his strained relationship with his father he is willing to share with his daughter.”

It’s that time of the year again where people take to the streets of New Orleans to celebrate Mardi Gras. However, this year, someone decided to ruin the festivities for everyone and stabbed a petty officer right there in open view. And sadly this case isn’t going to be an open shut robbery for the team.

Petty Officer Toussaint Patrice was found with both his money and wedding ring still on him. So on tonight’s all new episode of “NCIS: New Orleans”, the agents have to look into everything. All possibly grudges and whether or not Toussaint ticked someone off while he was partying. Because, unfortunately, there was a high probability he was partying the night he died!

According to the widow, her husband was a recovering alcoholic and he had been acting strangely long before Mardi Gras began. So when he disappeared that night – she felt like he did that to go score somewhere she couldn’t see. But security cameras showed he was someone stabbed the first time prior to even making it to the party.

The agents had checked out the security footage after they had a little chat with the guy that was last seen arguing with their petty officer. A former crook who also happens to be well-known in their area admitted to beating up their victim. Yet he said he didn’t stab anyone. And that Toussaint was already bleeding when he decided to teach him a lesson.

And, truthfully, the case just got weirder from there.

It seems that everyone that saw the victim decided to ignore his wounds. Patton confiscated dozens of cameras and in it they could clearly see their victim bleeding out. But at the time no one, either in the picture or behind the camera, chose to help this young man. Instead they kept partying meanwhile Toussaint’s killer chased him.

And speaking of his killer, Toussaint might not have been the innocent party everyone simply assumed he was.

It looks like Toussaint might have been a part of a drug ring. Several canisters of gas were recently stolen and the team eventually found them in Toussaint’s car. And to leave no doubt on whether or not Toussaint was involved – Patton found a picture of their victim carrying around a gas mask.

Now the canisters that were stolen have a high value on the black market. People normally use it to get high. So was their victim, an Iraqi vet, a drug dealer? Well, all signs points to it but no one knows why he would do it.

Toussaint was allegedly about to start a family when he was murdered. So did he become a drug dealer to because he was worried about money? Or did he do it because a fellow addict he was working with had somehow convinced him to join in on something much larger?

Unbeknownst to the wife, Toussaint had a met a man named Cyd at his recovering clinic. And Cyd was a part of a crew. This crew was about to perform one of the biggest heist of the year and yet something went wrong – Toussaint wanted to pull out towards the end.

It seems at the last minute he decided he couldn’t do it and so the crew gave Cyd orders. They told him to shut up his friend. And seeing as Cyd was the one to bring in this unknown entity – he felt like he had to comply.

He tracked his friend down at the hotel Toussaint was staying at with his wife and then he killed him. But he ended up getting caught when he made the mistake to not wear gloves. It seems the FBI have a new program that allows them to digitally scan a hand from video and pictures and that’s what led to the team finding Cyd because of his criminal record.

And after that, Cyd practically confessed to everything. He was so high on drugs that at the point he had nothing to lose.

So thanks to Cyd, the team was able to stop a heist. However Pride still had family issues to work through before he could finally get in the Mardi Gras spirit.

For the last few years, Pride’s father has been in prison. The older man has always had a knack for getting into trouble but lately he’s gotten so desperate to get his son to a write a letter of recommendation for his parole hearing – he fully prepare to play on his granddaughter’s heartstrings. So Pride had to get him off his back and the only way he could think of doing that was to facilitate a relationship between his daughter and his father.

Under his guidance, his daughter won’t try to hero worship a man that tries to sell her a sob story.