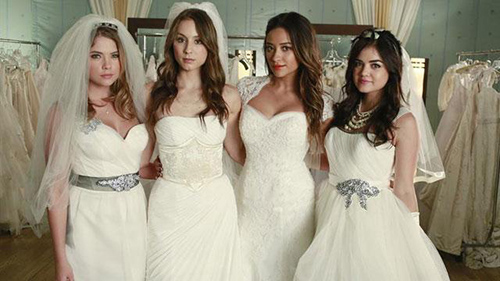 Pretty Little Liars Season 6 spoilers tease that the highly anticipated Winter Premiere is just a few weeks away, and is set to air on ABC Family on Tuesday, January 12. Of course, a new season of PLL is always exciting – but this Pretty Little Liars premiere is extra special, mostly because of the infamous “time jump.” Unless you have been living in a cave for the past year, then you are most likely aware of the Season 6 time jump. When the liars return in the Winter Premiere, five years will have passed since their high-school graduation – and they are all grown up!

Pretty Little Liars spoilers tease that the official Season 6 Winter Premiere synopsis is in, courtesy of ABC Family. The summary for the all new episode, titled ‘Of Late I Think Of Rosewood’ reads:

“After years of tormenting and numerous shocking revelations, the Liars finally uncovered the true identity of ‘A’ in the summer finale of season six. Now, five years later, the girls have each pursued their own paths and have started adjusting to a life without ‘A,’ when something happens in Rosewood that forces them to go back to where it all started. Torn between their old habits and their new lives, the events in Rosewood compel the Liars to join forces once again, as relationships are put to the test and secrets are revealed. Having matured over the past few years, these are not the same girls who left Rosewood. As new lies emerge — how will they push forward without going back?”

Pretty Little Liars Season 6B spoilers have indicated that the “something that happens,” which brings the liars back to Rosewood, is none other than Alison DiLaurentis. She stayed in the less than sleepy town to be close to her sister Cece Drake. Now, Alison has summoned all of the liars back to Rosewood to tell just one more lie for her to try and get her sister’s freedom back (Cece has been locked up for five years since it was revealed she was ‘A’).

Season 6B sounds like a typical Pretty Little Liars premiere – full of lies and secrets, according to the episode spoilers. But, there is actually something very different going on. For the first time in a LONG time, the liars are keeping secrets from each other, and the bonds they used to share are not as tight-knit as they used to be. According to Pretty Little Liars spoilers, Aria Montgomery (Lucy Hale) is actually keeping a huge secret from Spencer (Troian Belisario), Hanna (Ashley Benson), and Emily (Shay Mitchell). And Aria’s secret puts them all in danger and turns their Rosewood reunion upside down.

Are you as excited as we are for the Season 6 Winter Premiere of Pretty Little Liars? What do you think Aria’s secret is? Share your thoughts and theories in the comments below!