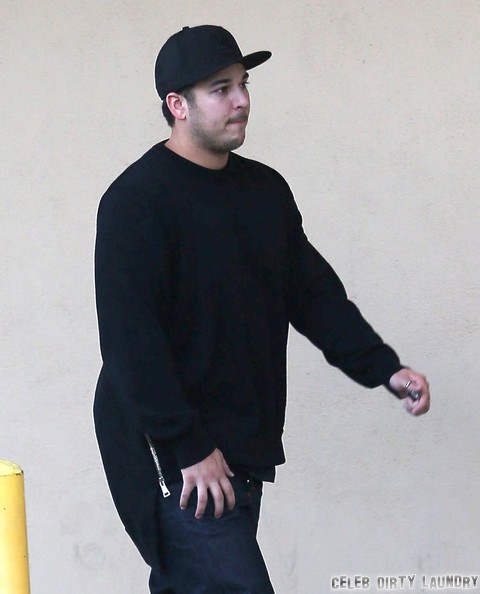 Rob Kardashian’s rapid weight gain has been followed by the media over the past year, and the former Keeping Up With The Kardashians star has topped off the scale at 350 pounds. It’s no secret that his monster momager Kris Jenner is embarrassed of her son’s weight, and has been hounding him to stop binge eating and to get himself together for over a year now. According to a new report, Kris is actually forcing Rob to get gastric bypass surgery, and footing the bill.

The July 27 edition of National Enquirer reveals, “Rob Kardashian is set to undergo secret stomach stapling surgery after ballooning to a scale-busting 350 pounds. Momager Kris Jenner will foot the bill for her 28 year old son, who has long battled weight woes.” According to the tabloid’s inside sources, Rob’s weight has made it impossible for him to fully function and live a normal life – and he has agreed to go through with the surgery.

National Enquirer’s inside source dished, “Rob has been living like a slob and gorging on food and drink to self-medicate. His life has become unmanageable. He’s reached a point where his health is at serious risk unless he does something drastic. Rob realizes he has no choice but to follow his mom’s advice. Rob has been prisoner trapped in his body for too long.”

It really is ironic that Kris Jenner is forcing Rob to get the weight loss surgery, seeing as how she is the leading reason he has so many emotional issues and is at the state that he is now. Sadly, the last thing on Kris’s mind is Rob’s health – she is more worried about how his weight affects her family’s image. Do you think Rob will go through with the surgery? Share your thoughts in the comment section below!