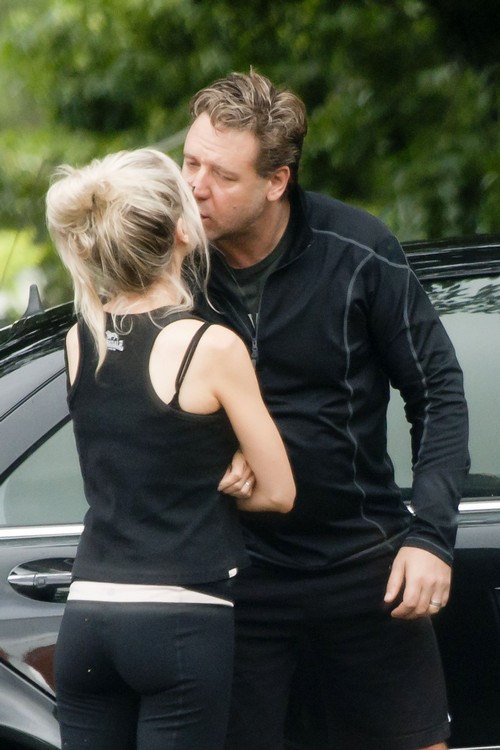 Russell Crowe is begging his ex-wife Danielle Spencer to take him back. Russell Crowe apparently realized the grass is not greener on the other side – after weeks of chasing after Royals star Elizabeth Hurley and getting shot down by the actress, Crowe decided that he would get back together with his ex-wife and mother of his children. Russell reportedly sent her a proposal via text message – and Danielle is actually falling for it hook, line, and sinker and considering remarrying him!

The May 18 edition of GLOBE Magazine reveals, “Just weeks ago he was chasing after Elizabeth Hurley. Now the changeable Russell Crowe is begging his ex, Danielle Spencer to take him back and get married again!” According to GLOBE Magazine’s inside source – Russell’s proposal wasn’t exactly romantic, but it seems to have done the trick. Their Hollywood insider dished, “Russell sent Dani a naked photo with the message, ‘will you marry me’?” What is even more shocking, is that Danielle actually was moved by the pervy message, and is seriously reconsidering remarrying the actor.

We’re not sure what is worse – the thought of 51 year old Russell Crowe naked, or the thought of a woman actually considering remarrying him just days after he tried to publicly romance Elizabeth Hurley. What kind of girl is perfectly okay with being someone’s back-up plan or second choice? GLOBE’s insiders insist that Russell is madly in love with his ex-wife, but we’re not buying it. If you are madly in love with a woman, then you put a little more effort in to proposing to her – and you don’t just send her a nude picture.

Do you think that Danielle Spencer is insane to get back together with Russell Crowe? How would you react if someone proposed via text message with a nude photo? Let us know what you think in the comments below!