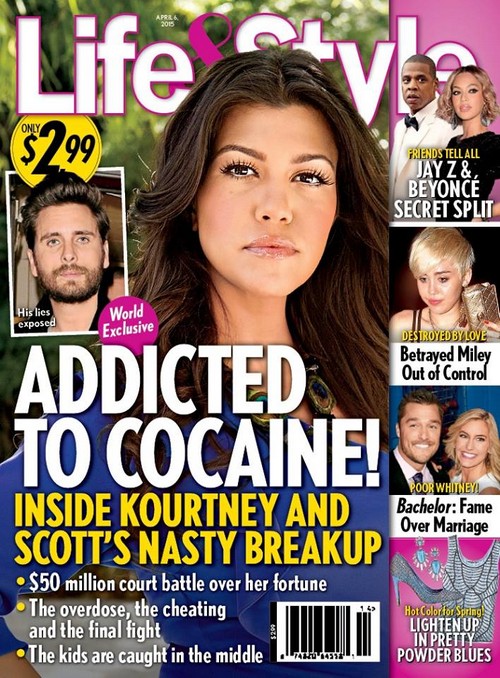 Scott Disick and Kourtney Kardashian are having a nasty breakup over revelation of Scott’s alleged cocaine addiction. Scott Disick’s relationship with Kourtney Kardashian has started dovetailing into disaster territory, ever since Scott’s addictions spiraled out of control. After the death of both of his parents, Scott Disick had an understandably difficult time dealing with the aftermath, and has since been turning to alcohol and drugs to deal with his personal demons. Unfortunately, he’s also neglected Kourtney and his children, including his newborn baby, in the process.

The latest cover of Life & Style Magazine suggests that Scott Disick is now addicted to cocaine, and his latest drug binge and rumored overdose has caused Kourtney to rethink their relationship, once and for all. There is apparently a $50 million court battle over Kourtney’s fortune, with the kids caught right in the middle. Plus, in addition to Scott’s drug and alcohol addiction, he’s also allegedly cheated on Kourtney numerous times. If it were me, I’d kick him to the curb with nary a penny or any custody at all, but I doubt Kourtney will do that. The Kardashian sisters have a history of letting these men stay in their lives for far too long, and I have a feeling Kourtney will continue that trend.

Life & Style Weekly also claims that Beyonce and Jay-Z have secretly split, but that wouldn’t be anything new, would it? They ‘secretly’ split last year as well, after the Solange elevator fight drama.

Plus, Patrick Schwarzenegger cheated on Miley Cyrus, and now, Miley is spiraling out of control – again. And finally, the Bachelor’s Chris Soules is choosing fame over marriage to Whitney Bischoff, which we have been prophesying ever since the engagement was first rumored.

What do you guys think about all these stories? Do you think that Kourtney Kardashian would have the guts to dump Scott Disick after finding out about his cocaine addiction, after all this time and all those children? Let us know your thoughts in the comments below.