So You Think You Can Dance Recap – Asaf and Marissa Eliminated: Season 12 Episode 10 “Top 16 Perform + Elimination”

BY Kristine Francis on August 3, 2015 | Comments: one comment
Related : Reality TV, Recap, So You Think You Can Dance, Television, TV 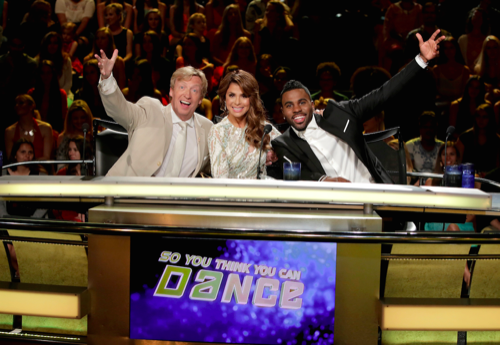 Tonight on FOX, SO YOU THINK YOU CAN DANCE continues with an all new Monday, August 3 season 12 episode 10 called “Top 16 Perform + Elimination“. We’ve got your recap down below. On tonight’s episode the Top 16 dancers perform, but two contestants are eliminated.

On the last episode, America had spoken! The Top 18 will performed live and two dancers had to say goodbye. Did you watch the last episode? If you missed it, we have a full and detailed recap right here for you.

On tonight’s show per the FOX synopsis “teams Stage and Street find out who will stay in the competition for another week in the fight to become America’s Favorite Dancer!”

After all the votes were counted, the win from last week just had to be handed to Team Stage. Though it’s only fair that everyone at home knows that they barely won this round.

Team Stage just managed to scrape ahead on tonight’s all new episode of “SYTHYCD” with a score ending in a .5. And normally that wouldn’t faze anyone. However that wasn’t much of a lead and unfortunately they had to start out this round with one of their own already in danger. Derek it seems had injured himself in rehearsals. And because of that he has to sit out the dancing this week which will make him automatically up for elimination next week.

So Team Stage is technically short a valuable player. Nor can actually do a trade with Team Street. If you recall what Jaja said last week – where she admitted that she’s now Team Stage – well that’s technically true. She didn’t change teams by abandoning Street for Stage. And though she’s wow the judges on consistent basis – Travis simply has to do without her.

Speaking of Jaja, though, she was up first tonight in African dance duo with Hailee where they performed a piece about female empowerment.

And they were good. Hailee has been picking up, performance wise, since her still talked about robotic dance. So it looks like she has the potential to be a frontrunner. But Jaja is the same. She’s just as talented and she also appears to be picking up momentum in this competition.

Thus it wasn’t that completely out there that they both turned out to be safe this week. Yet the duo that followed them didn’t have that much to worry about either. Neptune already knows that he’s a judges’ favorite. So that has assured him of his position. And Alexia has been improving these last couple of weeks.

She was never a horrible dancer but her problem was that she couldn’t stand out. And if her dance with Neptune did anything tonight then it definitely guaranteed that no one will be forgetting her anytime soon.

Neptune and Alexia had to dance a hip hop love story and it had its own special twist. It was supposed to showcase two people falling in love in a padded cell. And like Paula said, it was sexy, it was fun, and boy could Alexia twerk.

Though, and I have no qualms about saying this, no one has put in as much work this week as Team Street’s JJ. She was the one that supposed to be paired off with Derek yet had to become solo act when he injured a muscle near his spine. So in order for her to go ahead with her Argentine Tango – she had to be paired off with her choreographer Leonardo. As in the Leonardo in the famous Leonardo and Miriam.

So like the judges later told her, she was simply great and importantly she was a credit to her team. No one else could have overcome so many adversaries. And I for one thought it was unfair that she found herself in danger after one of her best performances in the competition.

Derek was in danger as well. But he’s injured. He could rest this week and still have problems next week. So maybe it will be for the best if he does go home before someone else loses out.

And after JJ’s stellar performance, Jim and Ariane did a very moving piece about depression. Jim was a man struggling and Ariane played his disease. However Jim was eventually able to overcome Ariane with their performance ending on him finally triumphant.

And maybe it was because resonated so well with everyone that it had the audience on their feet. But either way the dance showcased Jim in a light most of us hadn’t seen since Week One of the Top 20.

Ariane had a lot to make up for this week. Earlier, she kept failing at confectioning with the audience. And thankfully it seems like she’s worked on that. So much so in fact that the duo were even called Team Talent.

That’s how much everyone, including the judges, had loved their dance.

Yet this moment of theirs didn’t change the results from last week’s voting. And Ariane was put up for elimination which must have come as blow to someone that was finally getting great feedback.

So, in terms of power couples, the fact Ariane was part of one for a night might not be enough to save her in the long run. And the same goes for Kate and Asaf. The judges received a lot of flak for saving Asaf last week and I was one of the angry voices ranting.

Although Asaf is trying and that is good of him. But this week his dance with Kate was a good dance instead of great. And in the Top 16, it’s not exactly meeting the level of everyone else’s. So when both Kate and Asaf found themselves once again in trouble – I was right where I was last week – hoping Asaf would go home.

Nothing personal but his effort is not matching his improvement.

And you can see that especially when he comes onstage after both Gaby and Virgil. Now those two were favorites from the very beginning. And each week they actually show the audience why they should stay.

Virgil literally takes people to Disneyland with every performance. And on top of that, both Paula and Cat find him to be as cute as a button. So don’t worry about Virgil. Odds are he’ll make it into the top five.

As for Gabby, she’s been surprising everyone since her second audition. And it doesn’t look like she’s slowing down in the foreseeable future.

But a lot of hopes were put on Marissa and Yorelis on tonight’s episode and this one might have come as a personal blow to their team Captains when the girls failed to deliver.

Now Yorelis has had her issues in the past. If it’s not technique then its’ her facial expressions during the dance. Things like that. And, you know, Marissa suffered from the same things as well. So they’re equally the “almost” girls.

As in they always get close to have great dance and then the judges tend spot the littlest thing that are off. Yet the girls had a Hip-Hop number that at first appeared to be a great fit for both ladies. Because even though Marissa is Team Stage – her background in tumbling came in handy on this one.

And do you know where these two ended up going wrong – Marissa wasn’t as fluid doing hip-hop as Yorelis was. So they weren’t fully in sync onstage. Which really means they “almost” got it right.

Only there was nothing almost about Marissa getting put for elimination.

Marissa, Kate, Asaf, Ariane, Derek, and JJ were all up for elimation. And a problem could have been found with each and every one. Marissa has yet to have a breakout performance. Kate kept coming off as if she wasn’t doing when really she was. Asaf is Asaf. Ariane is only now getting into a groove and the same for JJ. And anyways Derek is injured.

Though before they announced who was going home, the oddest thing ended up happening. Megz and Edson danced a contemporary piece about struggling together and they completely changed the game. I mean they were beautiful together. And surprisingly Megz even came off as soft which is something, anyone that has been watching this year’s competition, is not used to.

Yet they were great. Great enough, at least, for the judges to believe their performance was going to become a staple for upcoming seasons.

So I was still coming down from that when the results were revealed. And I can only gripe about one of their picks. America’s vote saved JJ and Derek. And like said Derek is pretty much dead weight at this point.

However the judges saved Kate and Ariane over Marissa and Asaf. So thank you judges. You finally got it right!