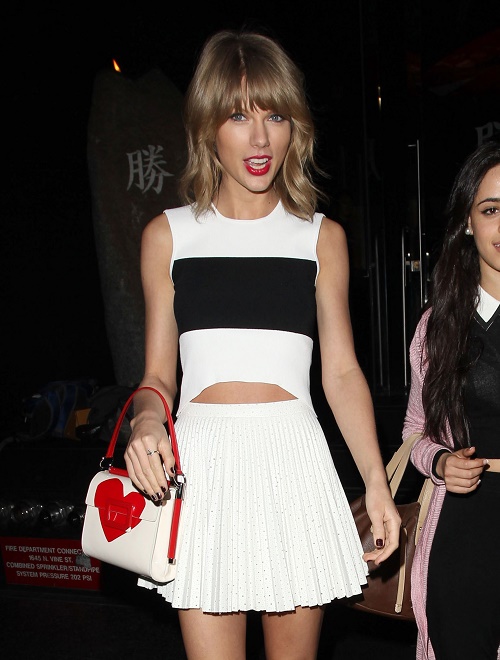 Are Taylor Swift and Lorde fighting? A report popped up in a tabloid claiming that former BFFs Taylor Swift and Lorde were in a huge fight over music – apparently, Taylor desperately wanted Lorde to collaborate on a song with her, but the 18-year-old pop singer shut her down. According to the report, Lorde told Taylor that their voices “wouldn’t mesh well,” and Taylor took offense.

The dynamics of Taylor and Lorde’s friendship have always been interesting – seeing as how Taylor is 7 years older than the New Zealand pop singer and has been on the music scene much longer. Despite Lorde’s breakout hits and ongoing success since she debuted in America, rumors have been floating around for a while that Taylor was jealous of her bestie’s success. Even though Taylor and Lorde are always taking photos together and hanging out, word on the internet is that Taylor secretly harbored a lot of anxiety over Lorde’s success.

But, it looks like those rumors are nothing more than just rumors. After OK! Magazine’s report of Taylor and Lorde’s fight hit the newsstands, Taylor took to Twitter to squash the story. Taylor tweeted, “Media, when you say “Lorde & Taylor are fighting”-by fighting do you mean “FaceTiming constantly from US to NZ and LOLing at you”? Thnx bye.” Lorde responded to Taylor’s Tweet and added, “Sisters are doin’ it for themselves.”

So, it looks like the rumor that Taylor Swift and Lorde were feuding is nothing more than just a rumor. Then again, it wouldn’t exactly be good publicity for Taylor Swift to confess that she was fighting with her supposed bestie over something so petty. What do you think? Was the report of Taylor and Lorde’s fight completely fiction? Or did Taylor just shut it down on Twitter because she realized she looked like an immature 12-year-old girl? Let us know what you think in the comments below!