The Bold and the Beautiful (B&B) Spoilers: Hypocrites Caroline and Ridge Confront Thomas on Ivy Cheating 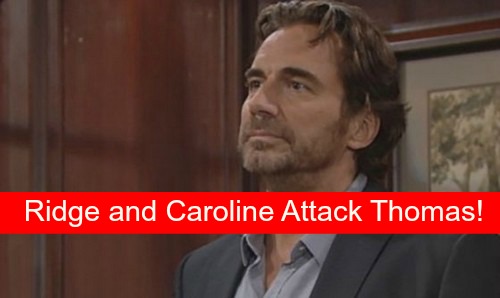 “The Bold and the Beautiful” (B&B) spoilers indicate that the drama over Ivy Forrester (Ashleigh Brewer) will amp up in coming days and Caroline Spencer (Linsey Godfrey) and Ridge Forrester (Thorsten Kaye) will jump into the fray uninvited.

Ridge feels like it’s okay to chastise Thomas Forrester (Pierson Fode) about macking on Ivy when she’s involved with Wyatt Spencer (Darin Brooks). But really, do Caroline and Ridge have any moral high ground from which they can lecture Thomas?

Ridge cheated on any and everyone with Brooke Logan (Katherine Kelly Lang) and also cheated with Morgan DeWitt (Sarah Buxton). Plus he and Caroline ended up together because they indulged in a flirtation while she was with his brother Rick Forrester (Jacob Young).

And Caroline hasn’t been a saint either – she was actively trying to split up Rick and Maya Avant (Karla Mosley), stole him back from Maya with her cheating ways and then when she got Rick back, cheated with Ridge. Do Ridge or Caroline have any room to talk?

Plus there’s the fact that Caroline is carrying Thomas’ baby and she and Ridge are blatantly lying to Thomas about it. Shouldn’t Caroline and Ridge be more circumspect and butt out of Thomas’ love life no matter what he’s doing?

By mid-week, we’ll see Caroline and Ridge confront Thomas about fooling around with Ivy, but they should not expect him to back off or see the error of his ways. In fact, Ivy’s near-death electrocution may inspire Thomas to go further.

Thomas started out messing with Ivy as a casual flirtation and then to win a bet with his sister Steffy Forrester (Jacqueline MacInnes Wood). But Thomas was already beginning to realize what a prize Ivy was and was developing genuine affection for her.

Now, seeing Ivy fighting for her life, Thomas will want to be the one at her side, not Wyatt. Thomas may stake a claim and throw down with Wyatt, perhaps even while Ivy is still comatose. Wyatt will NOT want Thomas at her bedside, but can he make Thomas back down?

Not only does Thomas want Ivy in his life, but he may blame himself, in part, for her accident. Why? Ivy went back to Forrester Creations because she and Wyatt argued over her kissing Thomas. That put her in harm’s way.

Plus, the bet he made with Steffy seems pretty shady now that Thomas cares about Ivy. Finally, there’s the question of Steffy’s possible involvement in the “accident.” Of course, we fans know that Steffy didn’t deliberately do anything to Ivy.

But Thomas doesn’t know that and neither does anyone else. Thomas may make a move, along with Wyatt and Liam Spencer (Scott Clifton) to protect Ivy from Steffy. Someone will slap Steffy with a restraining order to keep her away from Ivy by week’s end.

But as for Caroline and Ridge’s advice to Thomas to leave Ivy to Wyatt – no way is he going to back down. Their words will be wasted and any pressure they put on Thomas to back off will instead intensify his interest in Ivy.

Stay tuned to CDL for more on the Ivy-Thomas-Wyatt love triangle and the aftermath of her tragic accident – and be sure to come back often for daily “The Bold and the Beautiful” spoilers, gossip and more.