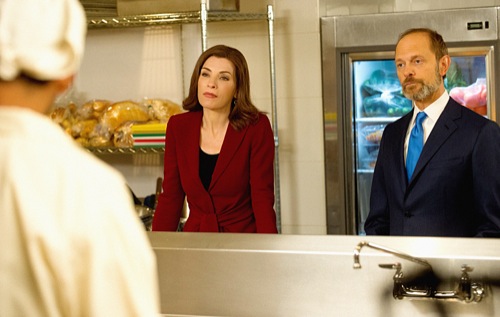 Tonight on CBS The Good Wife starring Julianna Margulies continues with an all new Sunday January 11, season 6 episode 12 called, “The Debate” and we have your weekly recap below. On tonight’s episode, Alicia [Julianna Margulies] and Frank Prady appear in a crucial debate in the race for State’s Attorney, while Peter [Chris Noth] and the city of Chicago prepare for a potential riot.

On the last episode, Cary hired a prison consultant to prepare him for incarceration while the team at Florrick/Agos/Lockhart did everything in its power to help him. Meanwhile, Alicia practiced for the State’s Attorney candidates’ debate. Chris Elliott guest stars as Adrian Fluke, an English professor brought in for Alicia’s debate prep. Domenick Lombardozzi guest stars as Bill Kroft, Cary’s Prison Consultant. Did you watch the last episode? If you missed it, we have a full and detailed recap right here for you.

On tonight’s episode as per the CBS synopsis, “Alicia and Frank Prady square off in a crucial debate in the race for State’s Attorney as Peter and the city of Chicago prepare for a potential riot, on THE GOOD WIFE, Sunday, Jan. 11 (10:00-11:00 PM, ET/9:00-10:00 PM, PT), on the CBS Television Network. Cable news host Chris Matthews appears as himself as the debate moderator. David Hyde Pierce returns as Frank Prady. Rachael Harris guest stars as Franny Zissis, an aide to the Mayor of Chicago.”

Tonight’s season 6 episode 12 looks like it is going to be great and we’ll be updating it live for you beginning 9PM EST.

Tonight’s episode of Good Wife kicks off with Eli and his team briefing her before a debate, she is going to have to comment on a current case involving police brutality, the jury verdict is about to come in. She receives a phone call from their wealthiest client, Neil Gross. Neil tells Alicia that he is walking away from their firm because Evan is offering his soon-to-be ex wife a $30 Million divorce settlement, which is double what they agreed to pay. Alicia calls Diane and fills her in and tells her that she thinks Evan is sabotaging the divorce proceedings and freelancing.

Cary and Diane head in to the meeting where Evan is arguing with David Lee, Evan explains that the reason he offered $30 Million is because David has pictures of Neil Gross in bed with his ski instructor and is threatening to leak them on the internet. Diane tells Kalinda to snoop around and see what David Lee is offering Evan and if they should pull him out of negotiations.

At the debate Alicia’s campaign manager reveals that they are in trouble – two minutes before Alicia goes on live television. One of the reporters in the audience has photos of the governor leaving his mistress Ramona’s house and he plans to bring them up during the debate. The campaign begins and Alicia takes the stage and shakes Frank Prady’s hand. Eli and the governor panic when they realize that the mayor is out of town – and they could have some serious riots on their hands when the verdict comes in and Peter will be blamed because the mayor is MIA. The debate kicks off, and Alicia is off to a bumpy start – she keeps stuttering and running out of time and being cut off.

At the office Kalinda reveals that Evan’s son is at a children’s hospital and just had tumors revealed, they realize that Evan has “become nice.” They realize they can’t pull him off the case – Kalinda reveals that she has pictures of Neil Gross’s wife cheating on him that she took when she was still working for David Lee. So, they can use the pictures to try and get the settlement down under $30 Million so that Neil Gross will be happy.

At the debate, Alicia finally gets in to a rhythm and addresses her husband’s cheating and curses out the reporter that claims he has photos. Then, their debate is interrupted for live coverage of the murder trial for suspected gang members – the police that shot them were found not guilty of all charges. Alicia and Frank head to the kitchen to eat, and start chatting. They joke that they agree on everything so the debate is pointless. They decide to have their own little debate in the kitchen to see if there is anything they actually do disagree on. Alicia and Frank begin arguing over the police murder case and the not guilty verdict.

Diane and Cary’s plan backfires when David Lee announces that he will just leak the photos that they have of Neil Gross’s wife in bed with his boss to TMZ too. They realize that the man in the photo is one of Neil’s old co-workers and that would mean that his wife violated the non-compete clause at their company. Once again, they offer $15 Million to David Lee and tell him that he has an hour to decide.

Much to Eli’s disapproval, Peter announces that he is going outside in to the streets where the people are protesting and rioting over the non-guilty verdict. En route to the protest Peter’s pastor offers to pray for him. Meanwhile, in the kitchen Alicia and Frank are still debating and have gathered quite an audience – some of the employees in the kitchen begin filming their argument on their cell phones – until Frank’s campaign manager interrupts and drags Frank away and says that he is eight points up in the election and there is no point “squandering it.”

Eli arrives at the protest and is furious when he realizes that Ramona is there waiting for the governor. As Ramona climbs in to the governor’s car – a reporter spots her. The news decides that they are going to put the debate back on. Alicia corners her campaign manager John – and tells him that their kiss the night before didn’t mean anything. John can’t look her in the eye, and agrees that it was nothing. Alicia makes him look her in the eye and insists that she doesn’t have feelings for him. As Alicia is getting ready to go back on the air, they learn that Frank Prady has called off the debate and says that he thinks it is inappropriate and they should be back on the streets with the people.

At the office, David Lee and Neil Gross’s wife find another loophole in the nude photos and Neil has no choice but to settle for a hundred million. Gross is furious, and fires Diane and Cary and says that he is taking his business elsewhere. Diane and Cary head to the parking garage and corner David Lee, they tell him that they want him back at their firm and will give him whatever he wants.
Ramone gets out of the governor’s car in tears and Eli orders her not to talk to anyone. He asks her what happened – and she says that the governor broke up with her and they said their goodbyes. Meanwhile, Peter meets up with one of the widows of the dead black men that were shot and killed by cops. He convinces her to get up on the stage with him and the pastor to address all of the protesters – she urges them to stop rioting and then Peter gives an inspirational speech to the people.

Alicia returns to the office and is surprised to find David Lee sitting in there – he informs her that he has come home and they are partners again. Alicia storms in to Diane and Cary’s office and demands to know what happened. Cary and Diane explain that they are replacing Evan with David – they made the decision an hour ago. Alicia is not happy that they didn’t include her in the decision. Diane points out that she made a decision to run for state’s attorney without including them. Alicia informs them she is not dropping out of the race and storms out of the office.