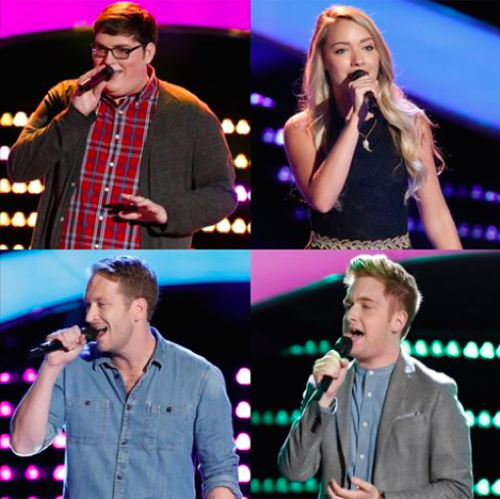 Tonight on NBC the Emmy award winning music competition The Voice continues with an all new Monday December 14, season 9 episode 26 called, “Live Finale, Part 1,” and we have your weekly recap below. On tonight’s episode in the final phase of the competition, the final four artists perform live in front of coaches Adam Levine, Blake Shelton, Gwen Stefani and Pharrell Williams.

On the last episode, the top 4 artists currently remaining were Barrett Baber, Emily Ann Roberts, Jeffrey Austin, and Jordan Smith. Did you watch the last episode? If you missed it we have you covered with a full and detailed recap right here for you.

On tonight’s episode as per the NBC synopsis, “in the final phase of the competition, the final four artists perform live in front of coaches Adam Levine, Blake Shelton, Gwen Stefani and Pharrell Williams. One of the four artists will be a step closer to being named “The Voice.”

Who are you rooting for and who do you think will be sent home tonight? Jordan Smith’s performances has cracked the top 10 on iTunes’ singles chart since season 9 began, the singer says he’s still shocked that he is doing so well. Do you think Jordan is a strong contender to win it all?

Tonight’s season 9 episode 26 is going to be exciting. We’ll be blogging it right here for you. In the meantime hit up the comments section and tell us your thoughts on season 9 of The Voice and who do you think is going to win it all?

#TheVoiceFinale starts with judge introductions by Carson Daly and then the rest of The Voice Season 9 eliminated artists. Jordan Smith talks about what his life was like before The Voice. He worked two jobs and went to college.

Jordan Smith sings a solo first tonight and has chosen “Climb Every Mountain” from The Sound of Music. That’s a hard one to sing. He hits all the notes and the crowd goes absolutely wild. Adam is up on his feet applauding his artist and Pharrell is up too. (VIDEO HERE)

Blake says there’s nothing left to say after Jordan sings. Pharrell says everyone in the room should appreciate this and calls it fantastic. Gwen says that’s one of her favorite songs. She thanks him for singing it. She says he has a message for everyone.

Coach Adam says he doesn’t have much time and says he’s amazing and says Jordan is so humble and says it’s one of the most beautiful things he’s ever seen. He says Jordan is doing what he loves and that deserves to win it.

Emily Ann Roberts is up next and does her holiday solo – she’s doing Elvis Presley’s “Blue Christmas.” It’s definitely got more of a country spin on it than the King did when he performed it but it’s very pretty. She does a pretty cool yodel thing with it.

Pharrell says he tells Blake all the time about how classic her voice is and says she’s very consistent and does something classic and it’s different and special. Adam says she’s so incredible and is the real deal.

Blake says it was a beautiful performance and says she’s got a vocal power and range and says she’s a master of her chops and she ramps it up. He says she’s unbelievably ahead of her time. (VIDEO HERE)

Next up is Barrett Baber’s duet with Coach Blake Shelton – they’re doing “Rhinestone Cowboy” by Glenn Campbell. Blake says he’s glad Barrett chose something with a vintage vibe. Blake and Barrett take the stage and they really do justice to the Glenn Campbell original.

Barrett holds his own beside Blake which is impressive enough of a feat. The crowd digs it and they end with a big finish. (VIDEO HERE)

Next is Team Gwen’s Jeffery Austin with his holiday song “O Holy Night.” Jeffery really shows off his range with this one and hits some incredible high notes – it’s lovely. Adam says his voice has a sweet spot that shakes the whole room.

Adam says it was a unique take on the song and he enjoyed it. Pharrell says he and Gwen have done a good job of working together. Gwen says she’s emotional and says he looks so cute. She says it was so beautiful and says he’s talented and deserves this. (VIDEO HERE)

Next is Jordan Smith and his duet with Coach Adam Levine – they are singing “God Only Knows” by The Beach Boys. They both have such high voices that they blend amazingly well. Their harmonies rival the original version by the classic California band. (VIDEO HERE)

Next up is Team Blake’s Barrett Baber again. Barrett does an interview about how much his family means and says that’s what this solo number is about. Barrett does “Die a Happy Man” by Thomas Rhett.

He’s got a stage full of fog like a bayou and a lot of swagger. The crowd cheers and Blake is on his feet clapping. Gwen says she felt like she was on another planet while he sang. She says his energy is strong and it all came together and he was so calm and told a story.

She says it was really good. Adam says he feels lucky to see his favorite people make it to the end and says he’s been a fan from day one. Blake says he’s never worked with anyone who puts more heart into their performances. (VIDEO HERE)

Emily Ann Roberts and Blake Shelton’s duet is next. They’re doing Dolly Parton again with her classic with Kenny Rogers “Islands in the Stream.” We see them goofing around while they rehearse. As expected, they kill it. Emily Ann has done Dolly justice again. (VIDEO HERE)

Next is an interview with Jeffery Austin about how Gwen has helped him grow and some of his song choices this season. For one of his solos, he’s changing up country song “Stay” by Sugarland. You could not tell it’s a country song at all. He’s really belting.

Blake says man, I like you doing country. He says it’s awesome and says he doesn’t know what to say to any of them since they’re so incredible. He says Jeffery snuck up on all of them and he makes more of a believer of all of them every time he’s on the stage.

Pharrell says this must be a good feeling to have this journey with Gwen after he didn’t perform for so long. He says Jeffery is an inspiration. Gwen stands and says he’s going to make real records and has a voice you can recognize on the radio.

She says he’s grown so much and says if you vote tonight, vote for Jeffery. She says she’s so proud and wants to be the first female coach to win The Voice. (VIDEO HERE)

Barrett Baber next does his holiday solo and he chose the classic “Silent Night.” He puts a serious bluesy and soul vibe into it. It was a very nice twist on a classic we all know and love.

Pharrell says his whole life story comes out every time he sings and it’s an amazing ability. He says he touches people when he sings and calls it next level. Adam says it’s super hard to come up with things to say to them and says he loves him and he’s still amazing.

Adam says he’s been a big fan and he did an amazing job again and he doesn’t have anything more interesting to stay. Blake says he puts his own spin on everything and that’s what will help him make it in country music after this. (VIDEO HERE)

Next is Jeffery Austin and Gwen Stefani’s coach-artist duet. They are doing Don Henley and Stevie Nick’s epic “Leather and Lace.” Interestingly, Jeffery outsang his coach. She wasn’t quite as good as Stevie but he gave Don Henley a run for his money. (VIDEO HERE)

Next up is Jordan Smith’s holiday song and he’s doing “Mary Did You Know” by Mark Lowry. He really gives the song a workout and is up and down his vocal range. As always, Jordan stuns. All the judges and crowd are on their feet.

Pharrell says the people are ready for him to make a record when the cheers don’t stop and says he hopes he goes to a label that really understands what made America fall in love with him. Adam then says he’d never heard this song and it was not his idea.

He says that shows that Jordan is an artist and had a vision and it’s his career and he’s happy that he let Jordan change because it’s the right choice and the one he wanted would not have been as good. (VIDEO HERE)

Emily Ann Roberts from Team Blake will finish the night with her solo “Burning House” by Cam. It’s a beautiful performance. The judges are on their feet. Gwen says that was her favorite performance of hers by far. She says she knows how to deliver the intention of the lyrics.

Pharell says it was flawless. Blake says people need to take note and vote for what they just heard and says she may have just pulled an upset in the competition and could win this. (VIDEO HERE)