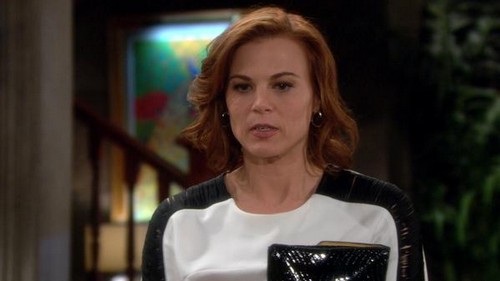 “The Young and the Restless” spoilers for Friday, January 23 tease an explosive episode of the CBS soap, and Y&R fans will not want to miss a second of all of the drama! Rumors have been floating around for a few weeks that Avery’s scheming hubby Joe Clark will be killed off – and there is a good chance Dylan (Steve Burton) may be doing the killing. “The Young and the Restless” spoilers for Friday’s episode of the CBS soap reveal that Dylan decides to “handle Joe” himself, and heads to his hotel armed and dangerous. When he storms into Joe’s room with the gun, he finds his fianceé Avery inside with his nemesis.

“The Young and the Restless” spoilers for Friday’s episode of the CBS soap also reveal that Jill and her family are preparing to buy Chancellor out from under Victor (Eric Braeden) – and Colin manages to shock them all and comes through with the cash that they need to do so. Unbeknownst to them, the cash that he literally serves Jill on a silver platter is actually Devon’s money, because Colin blackmailed him and Hilary … again. Ironically, when Jill asks Devon to throw down on the Chancellor deal, he reveals that he is strapped for cash.

In other “The Young and the Restless” news, Kelly (Cady McClain) is determined to get Jack away from crazy Phyllis, because she is “worried about him.” Kelly shows Jack the tea that Phyllis poisoned her with and paperwork from the hospital backing up her story, but Jack doesn’t want to hear it. He announced that he is standing by Phyllis, whether she tried to kill Kelly or not, because her behavior is just a side effect of the medicine Dr. Cutler gave her and is out of her control. Rumors have been floating around that Kelly may have actually poisoned herself and tried to frame Phyllis (Gina Tognoni) for the crime – and every day that theory seems to be more and more possible. If Kelly was truly poisoned by Phyllis, why didn’t she just file a police report?

So, Y&R fans, who do you think will walk out of Joe’s hotel room, and who will be carried out in a body bag? Do you think the writers are really killing off Joe Clark (Scott Elrod)? Will Avery possibly get caught up in the gunfire? Did Kelly poison herself, or is Phyllis to blame? Let us know what you think in the comments below and don’t forget to check CDL tomorrow for more “The Young and the Restless” spoilers and news.