BY Amanda Austin on April 20, 2015 | Comments: 7 comments
Related : Soap Opera, The Young and the Restless 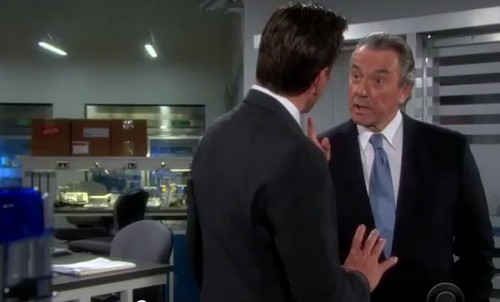 “The Young and the Restless” spoilers for April 20-24 tease another exciting week of non-stop drama in Genoa City, and according to Y&R rumors fans will not want to miss a single episode of the CBS soap. While some of our favorite Y&R characters head to court, Fake Jack (Peter Bergman) continues to wreak havoc, and romance is in the air for a few unsuspecting Genoa City couples. According to “The Young and the Restless” spoilers for the week of April 20 this is what fans can expect to see:

Monday April 20: “The Young and the Restless” spoilers tease that on Monday’s episode of the CBS soap Neil Winters (Kristoff St. John) heads to trial, and it doesn’t look good for the recovering alcoholic – Nikki (Melody Thomas Scott), Victor (Eric Braeden), Hilary, and Devon (Bryton James) all cause a raucous uproar in the courtroom. Meanwhile across town Fake Jack Abbott gets in to a fight with Billy and Ashley, the real Jack Abbott attempts to escape from Kelly (Cady McClain).

Tuesday April 21: Y&R fans have been racking their brains trying to determine who Victor Newman’s “secret partner” who meets him in the confessional is on the CBS soap, and according to spoilers in the latest edition of Soap Opera Digest the identity of Victor’s comrade will finally be revealed on Tuesday’s must-see episode. We’re going to go out on a limb here and assume it has something to do with Jack Abbott’s evil doppelganger.

Wednesday April 22: “The Young and the Restless” episode airing on April 22 will feature a heated confrontation between Chelsea (Melissa Claire Egan) and Victoria (Amelia Heinle), as the love-triangle between the two women and Billy Abbott (Burgess Jenkins) finally comes to a head. Meanwhile, across town Ashley Abbott (Eileen Davidson) worries about the future of her family’s company as she and Billy try to figure out how to save Jabot from Jack.

Thursday April 23: According to Y&R spoilers, Stitch (Sean Carrigan) and Victoria will have an amicable break-up and mutually decide that they just don’t share the same attraction as they used to. As soon as Stitch and Victoria are done with their heart to heart he rushes off to see her little sister Abby (Melissa Ordway), and plants a hot and steamy kiss on her!

Friday April 24: “The Young and the Restless” spoilers tease that on Friday April 24 fans can expect to see Michael (Christian LeBlanc) and Lauren’s marriage continue to struggle as his concerned wife realizes that they are no longer connecting the way they used to. After Jack Abbott’s first escape plan is squashed by Kelly, he attempts to use his charm to seduce the mad woman and get her to let down her guard so that he can free himself.

So Y&R fans, what do you think of all of the craziness in Genoa City right now? What do you think Fake Jack will do once he is exposed – will he turn on Victor as we have predicted? Will the real Jack break free from Kelly and get back to GC before Fake Jack completely destroys his life? What do you think of Victoria and Stitch breaking up, does he belong with Abby or is this tramp of a younger sister nothing but a wanton slut? Will Chelsea or Victoria win the battle over Billy – what a prize! Let us know what you think in the comments below and don’t forget to check CDL tomorrow for more “The Young and the Restless” spoilers and news!