The Young and the Restless Spoilers: Jack Returns, Proves Identity to Adam – Together The Pair Destroy Victor and Marco 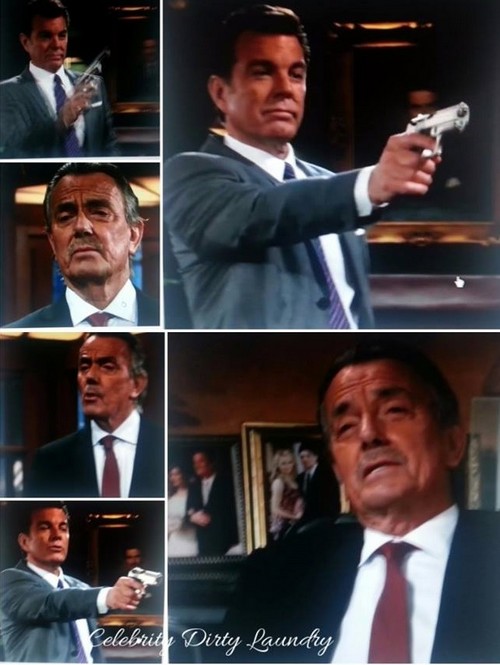 The Young and the Restless spoilers promise that the conflict between Victor, Marco and Jack has reached deadly proportions and this coming week of June 15 will see explosive conflict. CBS’s Y&R Fake Jack-Marco [Peter Bergman], Real Jack [ Peter Bergman] storyline is finally heating up. Last we saw Real Jack was on a drug smuggler cargo boat being held hostage with Marco’s lover Marisa [Sophia Pernas]. The Captain had just sold him to the highest bidder, the bidder being Marco Anicelli. On the homefront Fake Jack has been strategically setting Victor Newman [Eric Braeden] up for a fall no regular human being could recover from, but we are talking about the ole moustache here. Marco Anicelli is setting him up for felony after felony and who better to be successful with this plan than one of the FBI’s most wanted!

Marco receives a text that Real Jack is dead and also dead his lady love Marisa and it is bitter sweet for Marco. Victor is livid that he killed Jack, and makes his empty threats once again… as we have said early on in previous articles Victor has lost control of the monster he brought to town and reality is slowly starting to rear it’s ugly head. In days ahead we are going to see Victor actually become even more uneasy, the panic has already started to kick in when Marco told Victor he killed Real Jack and it only cost him $10 million.

The real Jack started a fire on the cargo boat where he is being held and the fire then caused an explosion, the boat blew to high heaven, it doesn’t take a source to tell us Real Jack lives and so does his nifty side kick Marisa. It will not be long now that real Jack and Marisa make it back to the States and back home to Genoa City. Y&R rumor has it Jack gets home and realizes nobody notices he is missing, that is strange to him considering he has been missing since his wedding day to Phyllis [Gina Tognoni]. Jack and Marisa lay low for now. On the Victor front Victor is up a creek without a paddle and IF in fact Jack Abbott is dead, it will all fall back on Victor, and then some! In Victor Newman’s whole life he has NEVER seen chaos like what he is going to see in his near future. We will see him squirm, be humbled, fear for his life and everyone he loves. We will see Victor like we have never seen him before. What is so ironic about this scenario is that Victor set out to demolish Jack Abbott yet it has backfired on him and the only person that can save him from murder charges would be Jack Abbott!

Marco has managed to incriminate the whole Abbott family with his diabolical framing plan. Jack and Marisa play detective – their first stop is Jack’s trusted ally Adam [Justin Hartley]. Gabe finds himself in a very unique situation – Jack has a doppelganger impersonating him and Real Jack tries to prove to Adam he is Real Jack. It actually does not take much persuasion considering how Adam has been having to live his life as an impostor too. Adam believes Real Jack, because who better to understand such strange circumstance?

Jack and Adam devise a plan to take down Victor and Marco – save Jabot and the whole Abbott family! Of course this is all down the road so stay close and watch as this double trouble story line begins to finally come to a head and Victor finally loses his own empire. What do you think CDL’ers, will Victor slime right out of this serious mess like the slick snake he is or will he finally get his comeuppance? Stay tuned to CBS’s Young and The restless and watch Jack Abbott take his life back as Victor loses his. We would love to hear from you, please leave your comments in the CDL and come back often more more Young and the Restless spoilers!

Watch The Young and Restless video spoilers ‘Whatever It Takes’ below!