‘The Young and the Restless’ Spoilers January 12: Jack Implies Adam Is Alive To Victor – Adam Orders Sage To Get Closer To Nick

BY Amanda Austin on January 10, 2015 | Comments: one comment
Related : Soap Opera, Spoiler, Television, The Young and the Restless 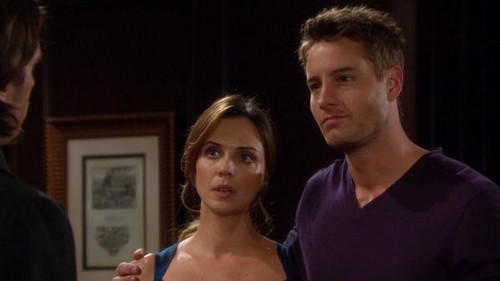 “The Young and the Restless” spoilers tease that on January 12 Victor heads to Chelsea’s house to update her on Connor’s stock, and he runs in to Jack Abbott while he is visiting Billy. Jack and Victor wind up in a war of words in front of Chelsea and Billy’s house. Also, Victor is thrown for a loop when Jack keeps mentioning Adam Newman’s name in the present tense when they are arguing. Y&R spoilers tease that when Billy is diffusing the situation, Jack explains to Chelsea that Victor is behind the development project and is going to put Dylan’s coffee shop out of business. Meanwhile, Billy asks his big brother Jack to be his daughter Katie’s godfather.

In other “The Young and the Restless” news, Y&R fans can expect to see Nick Newman continue to question Gabriel about the sailboat they sunk in boarding school – and he realizes that Gabriel is obviously not the same Gabe he went to school with. Adam Newman realizes that Nick could easily expose his scam as Gabriel – and he orders Sage to get closer to Nick and get all of the information she can on Gabe’s time in the boarding school.

According to “The Young and the Restless” spoilers, on January 12th Victor has a major blow-up with Dylan and Nikki, and Dylan accuses Victor of buying his coffee shop out of spite because he is upset that Nikki has a son with Paul Williams. Meanwhile, Paul continues to worry about Nikki’s drinking and leaves her a concerned voicemail – she reassures Victor that she hasn’t been drinking, her MS is just acting up.

So Y&R fans, do you think that Nick will figure out that Gabriel is an impostor? Do you think that Jack will accidentally blow Adam Newman’s cover? Will Dylan’s friends and family be able to convince Victor to drop the development deal? How much worse will Nikki’s drinking problem get before she finally gets help? Let us know what you think in the comments below and don’t forget to check CDL tomorrow for more “The Young and the Restless” spoilers and news.