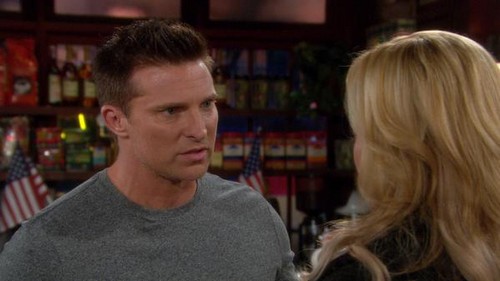 The Young and the Restless spoilers tease that the episode of the CBS soap airing on Thursday January 8 will be an explosive one – and the aftershocks of Dylan’s shocking announcement continue to rattled the residents of Genoa City. According to Y&R spoilers, no one is happy with Victor Newman after they learn that he is behind Joe Clark’s business deal.

The Young and the Restless spoilers tease that the January 8 episode kicks off with Nikki Newman demanding to know if Victor is truly backing Joe Clark’s business deal and buying Dylan’s coffee shop. According to Y&R spoilers, Victor doesn’t deny the fact that he is buying up the storefronts in Genoa City – and he dismissively tells Nikki and Dylan that it is “just business,” and they wouldn’t understand. On January 8 Jill and Cane decide that they are joining forces and taking Chancellor back from Victor Newman, after Dylan exposed what Victor was up to.

In other The Young and the Restless news, on the January 8 episode of the CBS soap, fans can expect an emotional scene between Mariah and Nick Newman at Cassie’s grave – apparently they both decided to pay their respects on Cassie’s birthday. Nick gives Mariah a ride home and Faith pleads with him to stay with them and celebrate Mariah’s birthday – however they spend most of Mariah’s birthday reminiscing about Cassie.

The Young and the Restless spoilers reveal that on Thursday’s episode Mariah snaps when Kevin arrives at her party and Sharon gives her an old gift of Cassie’s – because she doesn’t want Cassie’s hand-me-downs. Mariah apparently slips in to self-destruct mode and heads to The Underground so that she can kiss Summer’s husband Austin.

So Y&R fans, do you think that Mariah is being over-dramatic, or was it only a matter of time before she began acting out again? What will Summer say when she learns that Mariah kissed her husband? Do you think Jill and Cane will be able to take down Victor Newman and get back Chancellor? Let us know what you think in the comments below and don’t forget to check CDL tomorrow for more The Young and the Restless spoilers and news.