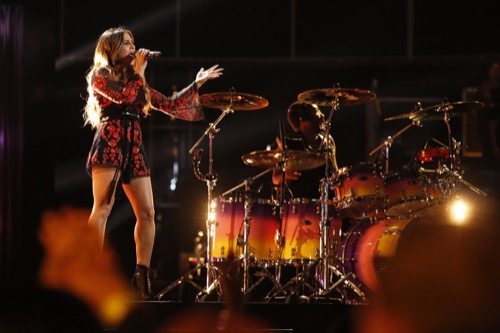 Alisan Porter of Team Christina chose to perform live “Desperado” by The Eagles this week for her Top 8 song performance. Did you watch tonight’s show? In case you missed tonight’s show, CDL has you covered – read our full and detailed recap right here!  And if you missed any of the videos – check those out right here.

On tonight’s Top 8 episode, Alisan sang “Desperado” by The Eagles as her live performance and this is the judges’ comments about her performance:

“Alisan is doing Desperado by The Eagles. Christina says it’s never been done on the show and knows she’ll do it justice. Pink calls it the bees knees. Pink says it was so good she made her hands sweat. Alisan takes the stage and sings the 70s classic. She slays and the audience shows much love.

Adam says she can do everything and someone who wins this show must be able to do that and have all the tricks in their bag and says she also connects emotionally to the song and audience. Blake says he looks forward to whatever she does because it’s incredible.

Blake says that’s one of his all-time favorite songs and she made it her own and calls her awesome. Coach Christina says she’s speechless when it comes to her and says she has pride and admiration for her talent and gift. Christina says it was epic.”

Check out the full video below – and share your comments on Alisan Porter’s Top 8 performance. Do you think Alisan can win it all? If you missed any of the Top 8 performances – you can see them all right HERE! Share your thoughts in the comments below on tonight’s finale performances for The Voice Season 10 Top 8.