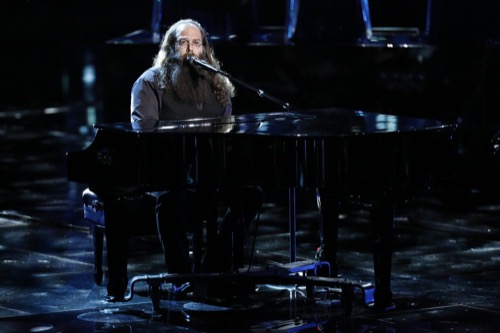 Laith Al-Saadi of Team Adam chose to perform live “One and Only” by Adele this week for hisTop 8 song performance. Did you watch tonight’s show? In case you missed tonight’s show, CDL has you covered – read our full and detailed recap right here! And if you missed any of the videos – check those out right here.

On tonight’s Top 10 episode, Laith sang “One and Only” by Adele as his live performance and this is the judges’ comments about his performance:

“Next is Team Adam’s Laith Al-Saadi and he is thrilled to meet Pink. Laith is doing Adele’s One and Only. Adam says he’s such a diverse talent and says his voice is the most distinct in the competition. Pink says he loves his voice. The crowd digs it.

Blake says that was amazing and calls it beautiful singing and the guitar solo worked. Pharrell says pay attention to Laith’s success story on the show. He says there is no record company involved – just Laith, the show, the audience and his music.

He congratulates him and says it was another great installment. Coach Adam says he would be most proud of he made it through because he represents something near and dear to his heart and says he stays true to who he is and he thinks Laith is so different and it would be an honor to get him to the end.”

Check out the full video below – and share your comments on Laith Al-Saadi’s Top 8 performance. Do you think Laith can win it all? If you missed any of the Top 8 performances – you can see them all right HERE! Share your thoughts in the comments below.