‘Dancing with the Stars’ Season 23 Premiere POLL: Who Had the Best Performance? Vote! 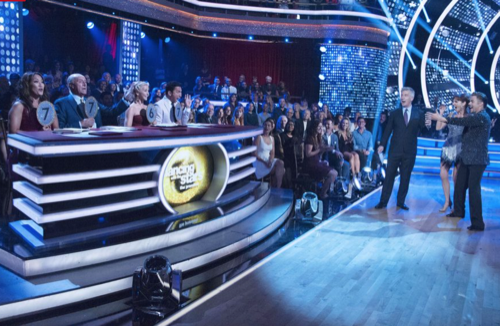 Once the celebrities were introduced, both hosts, Tom Bergeron and Erin Andrews took over the show, starting with a little blooper, when the teleprompter wouldn’t show them what to say, but they winged it and we all laughed. The four judges are back, including Head Judge Len Goodman, Julianne Hough, Bruno Tonioli, and Carrie Anne Inaba.

Marilu Henner is up first. You may remember her as part of the cast of Taxi, where she played Elaine O’Connor Nardo from 1978 to 1983. On DWTS, she has scored a great dancing partner in Derek Hough, who has won the Mirror Ball Trophy an amazing 6 times. Their first dance is the Jive. All four Judges had nothing but praise for them Carrie Anne (7) Len (7), Julianne (6) and Bruno (7). (Video Here)

Second up is Indy car driver James Hinchcliff, who only a year ago had a near-fatal crash on a practice run, crashing into a wall at 230 miles an hour. He is here to compete with professional dance partner Sharna Burgess. He is very competitive, let’s see how well he does on the dance floor. James and Sharna perform the foxtrot. Bruno said it best, “First Lap, First Class!” Judges’ Scores: Carrie Anne (8) Len (8), Julianne (7) Bruno (8). (Video Here)

Calvin Johnson Jr .(aka Megatron) is a former NFL Wide-Receiver for the Detroit Lions and now that he has beaten Jerry Rice’s football record, and now he hopes to beat his DWTS record too. He will be dancing with partner, Lindsay Arnold. Lindsay giggled and said it will be hard not to step on his size 15 feet, but let’s see how they do, when they dance the Cha-Cha!! Judges’ Scores: Carrie Anne (7), Len (6), Julianne (6) Bruno (7).

Maureen McCormick is known around the world as Marcia Brady from The Brady Bunch. When she was first introduced she said she had always wanted to be on the show, but dancing is a huge insecurity for her. Her tears got to everyone, and it was especially beautiful to see her TV mom, Florence Henderson there to support her. Her dancing partner is Artem Chigvintsev and they did the Viennese Waltz. Judges’ Scores: Carrie Anne (6) Len (5) Julianne (5) Bruno (6). (Video Here)

Kenny “Babyface” Edmonds, who has worked with Whitney Houston, Michael Jackson and Usher, confides in his new dance partner, Allison Holker the reason he decided to do the show is because this is way out of his comfort zone, and he wanted to make his late mom to be proud of him. Even though she is has passed away, he knew she would enjoy him dancing. They danced the foxtrot. Judges’ scores: Carrie Anne (7) Len (6) Julianne (6) Bruno (7). (Video Here)

Amber Rose, a talk-show host, model and full-time mom has decided to try out her dancing skills. When her new dance partner, Maksim Chmerkovskiy asked her why she wanted to dance, she had no problem telling him that she was an exotic dancer for 10 years. Maks tells her that is not dancing and that she has some unique curves, and even jokes that he had her back and even he has a “Kanye moment” a few times. These two dance the foxtrot. Judges’ scores: Carrie Anne (6) Len (6) Julianne (6) Bruno (6). (Video Here)

Vanilla Ice, who claims he has never seen the show, agreed to compete. When first meeting his partner, she said she is in this to win it, and she wants the Mirror Ball Trophy; Vanilla “Rob” Ice, had no clue what the Mirror Ball even was. His professional dance partner, Witney Carson decides that they are going to do the Cha Cha to his son “Ice, Ice Baby”; complete with backup dancers and a white Mustang! When it came time for the judges’ critique, as soon as there was a negative, the audience Booed immediately and loudly. Judges’ scores: Carrie Anne (7) Len (5) Julianne (6) Bruno (7). (Video Here)

Jana Kramer is a country singer and also appeared in the TV series One Tree Hill. She is currently going through a divorce and things get emotional at times, but let’s see if her dance partner can lift her spirits and bring her the healing she needs. Gleb Savchenko, professional dancer, has returned to DWTS and everyone is excited to see him back. Together their first dance is the Viennese Waltz. “This has got to be the raunchiest, sexiest, hottest Viennese Waltz I have ever seen”. Judge Bruno holds back nothing in his comments and says he cannot wait to see their Rumba! Judges’ scores: Carrie Anne (7) Len (6) Julianne (6) Bruno (8). (Video Here)

Jake T. Austin, former Disney star is joining with Jenna Johnson, who is first-time professional dancer on Dancing with the Stars. Jake is trying to get beyond the childhood stardom and be viewed more as an adult, but we are not sure his dance partner feels the same. They perform the Jive as their first dance. The judges didn’t have super good things to say about them, but good news is they have next week to perform better before people vote. Judges’ scores: Carrie Anne (5) Len (6) Julianne (5) Bruno (6).

Rick Perry is the Former Governor of the Great State of Texas. He is paired with Emma Slater and says his goal is to be able to dance for his daughter’s upcoming wedding. Together Rick and Emma are doing toe Cha Cha. What better song to use than “God Bless Texas”! For someone who has never danced, Judges are being pretty kind; they think it’s a little crazy, but the timing was off. Judges’ score: Carrie Anne (5) Len (5) Julianne (5) Bruno (5). (Video Here)

Terra Jole is the first little person to ever be on Dancing with the Stars, and has literally given birth 6 weeks earlier to her son, Grayson. Her partner is Sasha Farber, who has been a professional dancer on the show on 3 prior seasons. Terra has voiced her concerns that people may view her physical stature as a disadvantage but hopes people will see beyond her height. Terra and Sasha do the Jive. “I didn’t see a Little Person… I saw a STAR!!!!” Carrie Anne praises Terra. Judges’ scores: Carrie Anne (7) Len (6) Julianne (6) Bruno (6). (Video Here)

Ryan Lochte, 6-time Olympic Gold Medal swimmer, has joined the cast of DWTS season 23. We have to wait and see how the audience and fans are going to receive him. He is coming off a bad Olympic scandal, do you think fans can get past that? His dance partner will be Cheryl Burke, who has also been off for a few seasons. They performed the foxtrot. Cheryl chose the song “Call Me Irresponsible”, but in the same breath says she wants to help him get that second chance. (Video Here)

Before Dancing with the Stars’ Judge Carrie Anne could give her input, the show was stopped and went to commercial. Fans at home didn’t get to see everything that happened, but clearly, some people in the audience needed to be removed by security. You can see that Cheryl Burke is clearly shaken. How long will this pairing last? Judges’ scores: Carrie Anne (6) Len (6) Julianne (6) Bruno (6).

The youngest star, to ever compete on Dancing with the Stars Laurie Hernandez is 16-years-old and an Olympic gold and silver medalist in gymnastics. She will be paired with Valentin “Val” Chmerkovskiy, a huge fan of the “spicy” Olympian. She is super cute and spunky, but is she talented enough to stay in the competition? They are doing the Cha Cha and the judges have nothing bad to say about these two, other than swaying the hips a little more. Judges’ scores: Carrie Anne (8) Len (8) Julianne (7) Bruno (8). (Video Here)