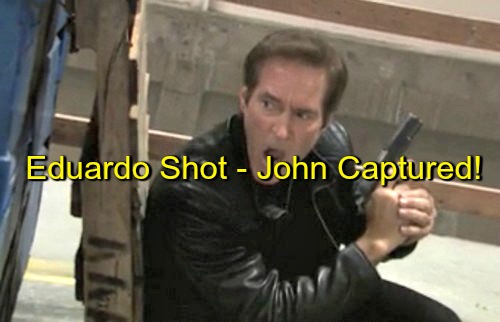 “Days of Our Lives” spoilers for this week’s episodes of March 7-11 tease that the NBC soap will pack in plenty of action and adventure. As CDL told you two weeks ago, an epic kidnapping storyline will get underway on Monday’s episode. When Marlena (Deidre Hall) and Arianna (Harper and Sydnee Udell) are abducted, John (Drake Hogestyn) and Eduardo (A Martinez) will immediately start trying to get them back.

DOOL spoilers reveal that Eduardo and John will receive emails with simple instructions. Bottom line, the assassin organization wants them to rejoin. If they agree, Marlena and Ari will be free to go. Of course, John and Eduardo won’t be on board with that idea. They left that life behind long ago and they’re not about to get roped into it again.

Days of Our Lives spoilers warn that Eduardo will tell Rafe (Galen Gering) about his dark past and assure him that he’ll bring little Ari home to Gabi (Camila Banus). He’ll vow to do whatever it takes. Unfortunately, the mission will take a wrong turn when John and Eduardo face a barrage of bullets. “Days” fans will be on the edge of their seats as gunfire breaks out.

“Days of Our Lives” spoilers say Eduardo will be gunned down as he works to secure Marlena and Ari’s freedom. He’ll be rushed to the hospital and the doctors will determine that the situation is dire. Eduardo will be taken into emergency surgery. It sounds like we’re talking about a desperate fight for survival.

Meanwhile, John will have a different kind of fight on his hands. You can expect the drama to continue as the agency gains the upper hand once again. Things will get dicey as John makes a bold move. Marlena and Ari will return to Salem safely, but John will remain in danger.

In fact, John will soon be the one who needs to be rescued. DOOL viewers will want to tune in for the second heroic mission. Days spoilers tease that even more people will be involved in this effort. Stick with “Days of Our Lives” for updates on the intense moments ahead.

So “Days” fans, what do you think about the news that Marlena and Ari will be taken by the organization? Will Rafe be impressed with Eduardo’s bravery? Will John get out of this mess? Voice your opinion in the comments below and don’t forget to check CDL often for the latest “Days of Our Lives” spoilers, updates and news.