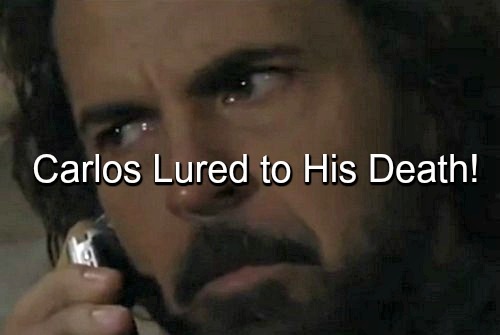 “General Hospital” (GH) spoilers reveal that on tomorrow’s episode, Wednesday, March 9 promises become threats for Port Charles residents. GH spoilers tease that Griffin is caught snooping, Carly has a tough talk with Jason, Tracy takes a turn for the worse, , and Anna turns to Sonny in defiance of Paul. Here’s what to expect.

First looks like Anna Devane’s (Finola Hughes) friendly neighborhood stalker Griffin Munro (Matt Cohen) will be spotted being shady but is it Anna who catches him lurking? Griffin will admit to hanging around but insists he’s not up to anything bad.

Later, at the hospital, Griffin talks to Monica Quartermaine (Leslie Charleson) about Tracy Quartermaine’s (Jane Elliot) curious case of medical malady that cropped up out of nowhere. Looks like he thinks Dr Mayes (Matt Riedy) is wrong about her brain lesions.

General Hospital spoilers warn that Griffin tells Monica he’s got a theory about Tracy’s ailment. Is it poisonous foul play? Disease? Something more ominous? Tracy meanwhile thinks she’s got one foot in the grave and goes to visit all the dead Quartermaines at the family crypt.

She hears noises and calls out for her brother Alan. Is Tracy hallucinating? Will someone find her there and notice she’s worse? GH spoilers reveal that Dillon Quartermaine (Robert P Watkins) will soon figure out his mom’s anti-depressant story was a big fat fib and demands the truth.

In shocking General Hospital spoilers Paul Hornsby (Richard Burgi) talks to Carlos Rivera (Jeffrey Vincent Parise) and tells him to come home – looks like Paul will offer him the deal to testify against Julian Jerome (William deVry) but will Carlos agree? He might if it’s a chance to be a free man with Sabrina Santiago (Teresa Castillo).

And will we found out what’s up with their baby? Is it okay? Anna doesn’t seem to trust Paul and it looks like she’s making a plan B. Anna goes to Sonny Corinthos (Maurice Benard) and tells him Carlos is alive and on the run with Sabrina.

Sonny will be stunned, but what it is Anna’s endgame with this? Does she wants Sonny to kill him as soon as he gives evidence against Julian? Does Anna want Carlos dead but doesn’t want to get blood on her hands in retribution for Duke Lavery’s (Ian Buchanan) death?

Michael Quartermaine (Chad Duell) will also get the news that Sabrina is on the run with her criminal baby daddy. But since Felix DuBois (Marc Samuel) has just reassured him that Sabrina really did love him, Michael will think something is off about that arrangement.

Carly Corinthos (Laura Wright) continues to rethink mob life and when she sits down for a talk with Jason Morgan (Billy Miller) about Sonny and the recent mob mess, Jason initially thinks she wants him back working for Sonny and says no.

Carly makes it clear that’s the last thing she wants for Jason and says he’s lucky to be out of the mob. They talk about his past and the role Sonny and the mob played and who he was before he was Stone Cold Jason Morgan. Jason wants to know more about his past. Carly can help.