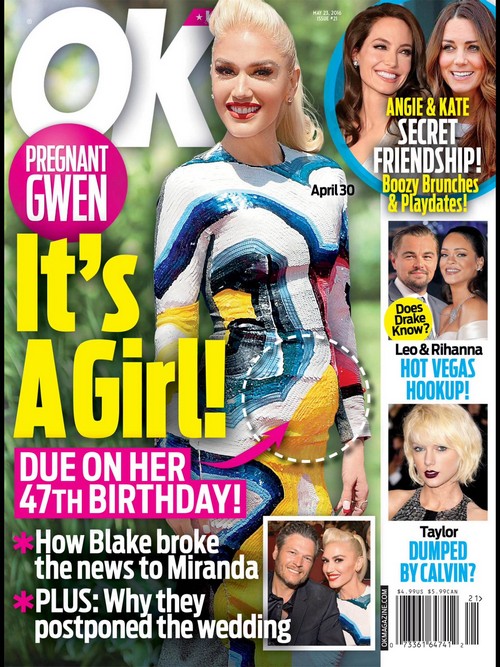 Gwen Stefani is pregnant and Blake Shelton is expecting his first child and has told Miranda Lambert about the baby if the latest reports are true. The couple is putting any wedding plans on hold as they await their first child’s arrival in sometime in early October.

That’s just in time for Gwen’s birthday who will be 47 on October 3. The daunting task of figuring out figuring out how to split their time between the Oklahoma ranch Blake owns and Gwen’s Los Angeles mansion has begun. Everyone a little bit overwhelmed right now what with the move and the baby on the way.

A wedding will just need to wait a little bit longer.

A source told OK! magazine that pregnant Gwen Stefani has agreed to make Oklahoma their base of operation. “They’ve agreed that Oklahoma is an amazing place to bring up children.” It’s definitely a much more relaxed environment than Los Angeles.

The country music mega star and the ‘Used to Love You’ songstress will get married eventually, the couple just wants to focus on preparing for the baby.

A move to Oklahoma means Gwen will probably have to rework any custody and visitation schedule she has with ex-husband Gavin Rossdale. Gwen has allegedly already given Gavin the news and the source says Gwen isn’t really all that concerned what her ex-husband thinks.

Reportedly Blake Shelton has already informed ex-wife Miranda Lambert that he is going to be a first time dad. Why would Blake tell Miranda? The couple has no ties to each other after their divorce in July 2015.

Apparently Blake thought the news would be best coming from him rather than a stranger. After all Blake and Miranda Lambert were together for nearly a decade, certainly she deserves to learn the news directly from Blake, right?

As Gwen’s baby bump becomes more noticeable Blake’s not going to be able to keep the secret much longer. Blake Shelton and Gwen Stefani aren’t sharing the baby news with anyone but their exes. However the insider says Blake can barely keep his excitement hidden from the world.

Blake is going to have an exciting year what with a baby on the way, a wedding to plan, moving Gwen and her three boys to Oklahoma. He’s also nominated for two CMT Music Awards for ‘Sangria’: Video of the Year, Male Video of the Year.

Is Gwen Stefani really expecting a baby with Blake Shelton? Gwen’s at the age where getting pregnant without medical intervention isn’t as simple as it is for a woman in her 20s or even 30s.