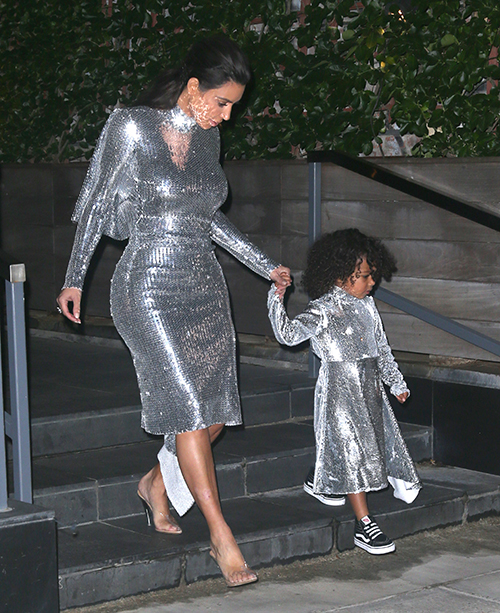 It was the toddler’s first Kanye West show. According to E! News, the mother and daughter duo’s long-sleeeved matching cocktail dresses retail for $12,950. And while there’s no doubt that Kim Kardashian was dressed to impress, North West looked like she wanted to be anywhere but at her father Kanye West’s concert on a Monday night.

Clearly, Kim Kardashian is enjoying every opportunity she gets to show off her children North West and her 8-month-old son Saint West to the paparazzi. North West and Saint West are so used to living a public life in the spotlight that they think it’s normal. Each time North West steps out with her mother Kim Kardashian or any member of the Kardashian family, photographers are always there to flash their lightbulbs and scream at them for their attention. Instead of living a quiet life out of the celebrity spotlight, North West is being used by Kim Kardashian and her family to sell their image and keep their name in the media and tabloid headlines.

Kim Kardashian knows that dressing North West in a matching, expensive sequined dress will be all over the gossip blogs the next day. Just like her mother Kris Jenner, Kim Kardashian is manipulating the media by extending her fame with her children North West and Saint West while other celebrities of her status and caliber would have been long forgotten by now.

Of course, this doesn’t mean that what Kim Kardashian is doing is right. No 3-year-old child should be taken to a late night concert or used as a photo prop for the paparazzi when clearly she should be at home reading books and getting ready for bed. Unfortunately for North West though, Kim Kardashian doesn’t realize that.

Take a look at our photo gallery below of Kim Kardashian and North West and let us know what you think. Tell us, should Kim Kardashian be using North West for paparazzi attention? Should North West be at home asleep rather than at a Kanye West concert? Also, don’t forget to check back with CDL for all the latest updates on Kim Kardashain, Kanye West and all of your favorite celebrities right here.