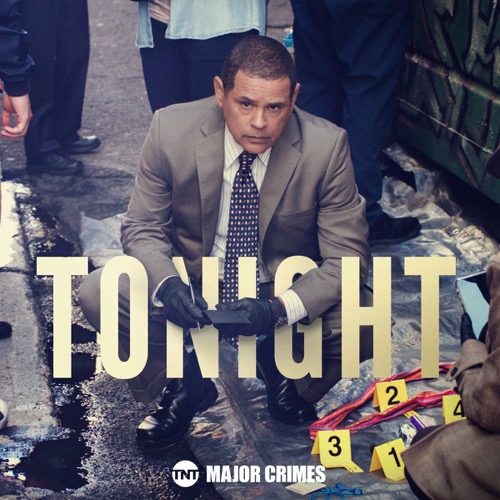 Tonight on TNT Major Crimes airs with their all new Monday August 1, season 5 Episode 7 called “Moral Hazard,” and we’ve got your Major Crimes recap down below! On tonight’s episode a shoot-out results in the deaths of three people and leaves the division racing to track down an unhinged shooter before he strikes again.

On the last episode, two British tourists got attacked during a Venice Beach robbery. Did you watch the last episode? If you missed it we have a full and detailed Major Crimes recap, right here for you.

On tonight’s episode per the TNT synopsis “a shoot-out results in the deaths of three people and leaves the division racing to track down an unhinged shooter before he strikes again. Elsewhere, Rusty pushes against police policy to snoop into the murder of Buzz’s father and uncle.”

Tonight’s episode is going to be filled with action and you won’t want to miss it, so be sure to tune in for our live Major Crimes recap of the show tonight at 9 PM EST! While you wait for our recap hit the comments and let us know how excited you are for the season 5 episode 7.

Elliot Chase was considered to be mentally unstable on tonight’s episode of “Major Crimes”. The Major Crimes Unit apparently had to put out a city-wide search for Elliot after he killed three people because his car had been towed and getting it back had required too much paperwork. So Elliot had seemingly decided to bypass having to wait because the attendant helping him had told him his DMV tag was expired and instead chose to kill her as well as the two others in building in order to get to his car. Although oddly he didn’t necessarily want the car back because he had left at the tow yard. And had just taken his bag full of guns with him.

The guns unfortunately, were why Elliot wanted his car back. So nothing and no one else mattered to him as long as he got those guns back. However, what the guys and even Elliot’s ex-wife wanted to know was why. Why did Elliot put some many guns together because the little they had seen on the security camera showed that he had several assault rifles on him and generally people don’t go looking for those unless they have a plan. Elliot’s ex-wife Karen though wasn’t much help. Karen had actually loaned Elliot her car because Elliot had lost his after coming in late with some of his payments so she had thought she was helping him. And didn’t know that he was unwilling involving her until the cops dragged her in.

But Karen and the police were united in wanting answers. The death of three people and a bag full of weapons had spelled out that Elliot had a plan. Like a possibly mass shooting for instance. So Karen told the police that things have been hard for Elliot and that their arguments about their money issues had been one of the things that led to the divorce however the detectives also found out that he had gotten fired and was on the brink of losing everything. And so they had been trying to find Elliot before he could kill someone out of revenge yet they had been just a little too slow to catch onto what Elliot had been planning.

Elliot’s crime spree which had started with simply shooting three people at the towing company had changed gears. So his next victim had been tortured to death while his third victim had walked right into a trap when he thought Elliot was towing his car. Elliot it seems had stolen one of the tow trucks so that’s how he was getting around town and continuing with his master plan even as Major Crimes were wondering if he were using Uber. Yet, Rusty was surprisingly getting in the way of the investigation. Rusty who had wanted to help Buzz had been looking into Buzz’s father and uncle and he had been asking everyone for advice with the occasional assistance. And that had upset Buzz because he felt that Rusty was crossing a line.

So Buzz was distracted and Rusty kept on taking time away from the investigation to ask questions. But all the while Elliot had been getting revenge for petty grievances and stealing his victim’s identity to get access to a conference. Elliot had used his last victim’s identification to book himself into a courtyard view hotel room at the conference and so Elliot’s grand plan was all about taking out the mortgage brokers that had helped to ruin his life. And yet to get everyone to leave the conference and go outside to the courtyard, Elliot released all of the money he had stolen from his victims into the courtyard which he hoped would lure them out.

However, Sharon and her team had made it in time to kick down the door and so they had stopped Elliot from killing anyone else. Even if they couldn’t’ stop him from taking suicidal dive off his balcony. So it was win, but not something that any of the detectives could be proud of. They had wanted to take Elliot in and have him face charges for the five people he murdered. And in the end, he got to go out believing he was some kind of martyr that had been unjustly abused by the banks and ever had to face up to what he did to other people’s families.

Elliot however, will soon be forgotten after the latest news cycle. Though Rusty did reach a breakthrough of sorts. Rusty had realized that the same system the police use to match fingerprints to criminals could also be used to find eye-witnesses. So all he needed was Buzz’s say so in order to test out his theory and find a possible witness that could help give Buzz the answers he’s always wanted, but Sharon and also Rusty’s partner had told him to choose another day to ask. Like possibly the one after they stopped Elliot’s reign of terror.

So we won’t know until later on in the season if Buzz finally gets over his privacy issues!