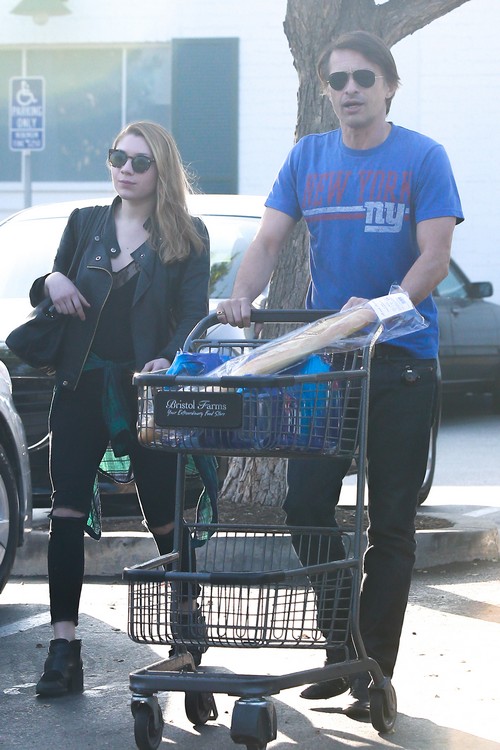 Olivier Martinez may be dating the woman he was seeing leaving a supermarket with on Saturday, February 13. Is Olivier dating this mystery woman after splitting from Halle Berry?

The Berry-Martinez divorce got ugly there for a while but things seem to have calmed down. Olivier and Halle appear to be effectively co-parenting their son two-and-a-half-year-old son Maceo. It even looks as if most of Martinez’s free time has been spent with the toddler lately.

So, is Olivier dating? If so, we want to know who the blond is! And what was the couple shopping for? Did the duo share an intimate, candlelight pre-Valentine’s dinner at home? Maybe it was Halle’s weekend with Maceo and Olivier took advantage of the downtime to romance the new lady in his life.

Halle Berry hasn’t exactly been all alone since splitting from Olivier Martinez. Just before Christmas 2015 the “Extant” actress was seen with rapper Chris Webby. At the time things between the 49-year-old Berry and the 27-year-old Webby appeared to be casual.

Is Olivier’s heart on the mend and is the French actor ready to date again? It could be possible that the long-haired lady is no one special – she could just be Maceo’s nanny and Martinez needed some help grocery shopping. But watch those guys and their blond nannies! The nannies have been known to provide a shoulder to cry on and a comfortable bed to share.

Is Olivier Martinez over Halle Berry and officially off the market – or is this just a fling? Grocery shopping isn’t indicative of a relationship, and it’s certainly not romantic. But you generally don’t pick out produce with just anyone, do you?

Who knows what romantic foods the couple purchased? Oysters? Caviar? Chocolate-covered strawberries? A couple of rib eyes to throw on the grill? Maybe the duo stopped off and bought and expensive bottle of champagne on the way home!

Martinez might have been picking up goodies for when Maceo gets back from visiting Berry. Toddlers need to eat too, right? And if this young woman is the boy’s nanny she would be the one who knows what the little guy likes to eat.

Olivier Martinez was spotted leaving the market with mystery girl on February 13, 2016. Olivier has spent much of his recent time focused on his son after splitting with Halle Berry. FameFlynet