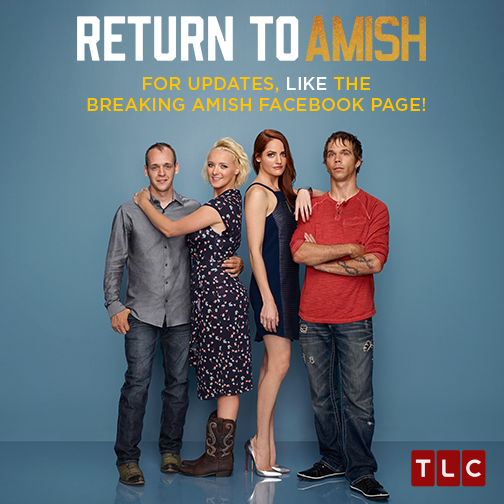 Tonight on TLC Return to Amish, the Breaking Amish spin-off airs with an all new Sunday, July 31 season 3 episode 4 called “You Lie!,” and we have your weekly Return to Amish recap below. On tonight’s episode, Esther strikes a deal with Mary to experience English life.

On the last episode, Abe mulled his dental work and wonders if the cost was worth compromising his Amish beliefs. Did you watch the last episode? If you missed it, we have a full and detailed Return to Amish recap right here for you.

On tonight’s episode as per the TLC synopsis, “Esther strikes a deal with Mary to experience English life; Sabrina’s nervous about speaking at NYU; bitterness rises between Rebecca and Sabrina.”

Things in the Schmucker family were unraveling at an alarming rate on tonight’s episode of “Return to Amish” and unfortunately Mary was continuously caught in the middle. Mary’s daughter Esther had apparently needed some time away from her sister-in-law after last week, but eventually, in time the young woman realized that she was going to have to try and speak with Rebecca again about why Rebecca didn’t want her around. Rebecca had kind of accused Esther of being this selfish kid that never had to go through everything she had. So Esther had tried to explain that she wasn’t selfish and that all she was doing was following her dream however Rebecca seemed almost resentful about Esther possibly doing that.

Last week, Esther had originally said that she had come to NYC because she wanted to support her mom and be there for Mary during these trying times, but Esther later admitted that she had come for her first as well. So Esther had confessed to wanting to experience the English lifestyle and that should’ve been that. However, Rebecca kept mentioning her own experiences and how Esther was allegedly never there for her family so the conversation didn’t appear as if it was going anywhere. And if anything all it did was exacerbate the problems that Rebecca had with Esther and that Esther now has with Rebecca.

But Mary still wanted to try and help the two repair their relationship. Mary knows that she’s always been a little protective of Esther seeing as Esther was her youngest and her baby yet she had wanted for Esther to get along with Rebecca because she knew how important it was that her family came together. Mary was banished from the Amish community in Punxy and so she was leaving behind the majority of her family in Punxy to start over in Lancaster. So part of Mary’s reasoning for why she wanted the two women to get along was because she wanted Esther to have people around her that she could always turn to and who could possibly support her in staying Amish.

The whole staying Amish thing, now, might sound weird seeing as it was coming from Mary of all people however, Mary was quite adamant when she said she didn’t want Esther to become English so she was actually trying to fight that possibility in whatever way she could. So Mary’s protectiveness with Esther was seemingly a lot different than what she went through with her other children. Yet, in spite of what Mary wanted, there was no really holding Esther back. Esther wanted to experience the English lifestyle and it honestly didn’t matter how much her mom kept trying to fight it. Mary simply had a daughter that wanted to be free to be English.

So that also went for Rebecca because Esther didn’t really care about Rebecca’s opinions on the matter. Esther wanted to experience the English lifestyle in New York so there was no stopping her and to be fair neither Rebecca nor Abe were making it easy for anyone to want to talk to them. Rebecca had gotten that job at the bakery and so she was learning a few things there, but in between the new job and the second honeymoon she had practically taken with Abe, she and her husband were kindly unavailable to pretty much everyone.

Abe and Rebecca had sort of forgotten why they had come to New York in the first place. They had initially said that they wanted to be there for Mary and to also support Sabrina yet if that were the case then why would they then be disrespectful to Sabrina or get upset because Mary wanted her daughter Esther to be with her as well? That doesn’t make sense and therefore it wasn’t that surprising that the couple ended up quickly wearing out their welcome. Things eventually came to head with Sabrina after she had given her talk at NYU because before that Sabrina had been really nervous about talking to that class and admittedly Abe and Rebecca hadn’t been supportive of her. So that had just reminded Sabrina about Lancaster.

Sabrina and Rebecca had apparently talked before Lancaster and so Sabrina had this idea that they would be able to recapture what they once had. So Sabrina had thought that they would both make an effort to be friends again though was shocked when Rebecca began to act coldly to her in Lancaster and then later on in New York. But Sabrina had lost her cool when she finally decided to confront Rebecca and that more than anything made both Rebecca and Abe shut down on her. Sabrina had legitimate reasons to be upset and she had at first tried to talk to Rebecca kindly by saying that her feelings had really been hurt yet that message was lost when she went off.

Sabrina had finally gotten fed up with the cold reception and so she began cursing at Rebecca and even called the other woman a selfish bitch who lies all the time. So that had gotten Rebecca upset and Abe who doesn’t like to see his wife upset had then gotten in Sabrina’s face. Yet, Jeremiah wasn’t going to take that lying down so Jeremiah had pointed out to Abe that they should let the two women handle things like adults and not interfere. And when he saw that wasn’t working with Abe, he purposely stepped in the middle and let the other man know that he wasn’t going to allow Abe to threaten Sabrina.