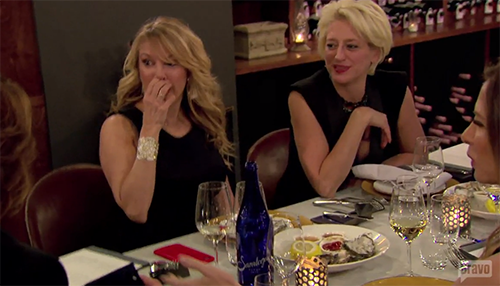 The new season premieres on Wednesday, April 6 at 9pm ET/8pm CT. In the preview video released by Bravo, it’s revealed that Ramona has undergone some changes post-divorce. Ramona is still partying, only harder and more frequently. Ramona also has new set of ample assets.

Even though Ramona Singer is drinking as much as ever, she feels the need to confront Sonja Morgan about her drinking problem. Ramona believes Sonja is in denial and it’s so sad. Ramona is afraid Sonja is going to end up dead.

Luann de Lesseps is over Jacques and has moved on to a new love. His name is Thomas D’Agostino, the founder, president, and CEO of Smart Source LLC. RHONY fans will get a tease about Luann’s engagement to Thomas. The couple didn’t publicly confirm their engagement until February 2015 but in the preview Luann asks the ladies if they want to see the ring. Then someone shows off a huge yellow diamond ring and the RHONY gals squeal with joy.

Bethenny Frankel will face some sort of medical crisis that will require surgery. Bethenny is shown saying, “I have to do the surgery.” Then, a crying Bethenny asks someone to “tell Megan she has to find out if I have a living will.”

Bravo has replaced Kristen Taekman and Heather Thomson with a new lady: Julianne Wainstein, a friend of Dorinda Medley’s. Julianne, you can call her Jules, is the only RHONY lady who is actually married. She is Jewish and Asian. But Carole Radziwill tells the other ladies, you don’t have to remember that. Julianne Wainstein will remind you every chance she gets.

The Real Housewives of New York City looks like it’s going to be another scream fest full of accusations, fights, and everything viewers love about their favorite reality television show. As Carole Radziwill says at the end of the clip, “Yep, these are my friends!”

From the preview clip it doesn’t seem as if anyone is going to get along for any significant amount of time during The Real Housewives of New York City season 8. Luann de Lesseps and Bethenny Frankel are fighting, Sonja Morgan and Ramona Singer are barely friends anymore and it appears as if everyone is ganging up on Dorinda Medley.

Let us know what you think in the comments section below and come back to CDL for the latest The Real Housewives of New York City news.