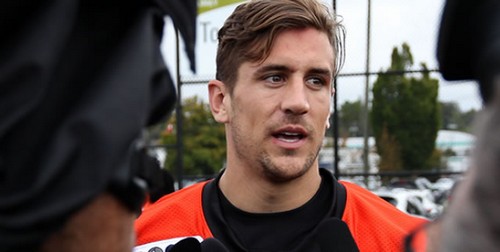 The Bachelorette 2016 spoilers tease that Jojo Fletcher lying – she is pulling the wool over producers and viewers’ eyes – and The Bachelorette Season 12 contestant has been telling a few (okay quite a lot) of fibs in her interviews with the media. Bachelor blogger Reality Steve sees all and knows all, and he took to his website to let it be known that Jojo Fletcher has been spinning a few tall tales.

Before The Bachelorette 2016 premiere on ABC, rumors were floating around the internet that Jojo Fletcher had been a BUSY girl. Not only was she reportedly canoodling with Bachelorette alum Nick Viall, but word on the Internet was that she and frontrunner Jordan Rodgers had been getting to know each other before the show started too.

After the Season 12 premiere of The Bachelorette on ABC, Jojo Fletcher participated in the traditional media conference call – and of course Nick Viall and Jordan Rodgers both came up. Jojo vehemently denied hanging out with Nick, and insisted she had never spoke to Jordan before he climbed out of his limo and met her in front of the Bachelor mansion.

Jojo insisted that she had never spoke to Jordan Rodgers – not on the phone nor on the Internet. She confessed she saw the reports that he had been cast, but that was as far as her knowledge of the frontrunner went. Is Jojo Fletcher lying?

And, according to Reality Steve’s Bachelorette 2016 spoilers, that is 100% not true. Jojo Fletcher has clearly been given a couple pointers from TPTB on how to conduct a proper interview and … deny, deny, deny.

Spoiler guru Reality Steve dished: “And of course she’s not going to admit they were in contact. That wouldn’t be smart of her, nor would they ever want her to acknowledge that happened. But it did. Again, if there were ever a court order done to turn over her phone, or she was hooked up to a lie detector test and asked the same question, she’d fail.”

What do you guys think? Did Jojo and Jordan Rodgers pull a Kaitlyn and Nick and start getting to know each other before the show started? That would definitely explain why she seemed to comfortable with him during the Season 12 premiere. Let us know what you think in the comments below and don’t forget to check CDL for all of your Bachelorette 2016 spoilers and news.

This purple backdrop @popsugar is giving off some serious early 90’s/ Saved by the Bell vibes….I’m digging it.