The Bold and the Beautiful Spoilers: Eric Improves, Disgusted With Ridge – Steffy Has Second Thoughts, Makes Love With Liam? 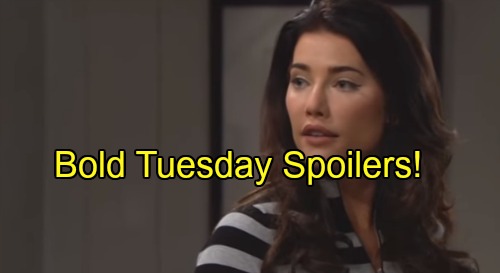 The Bold and the Beautiful (B&B) spoilers for Tuesday, October 18, tease that Quinn (Rena Sofer) will marvel at Eric’s (John McCook) generosity. She’ll be amazed that Eric would put her in charge of everything while he’s incapacitated. Quinn will consider it a great gift and she won’t want to let Eric down.

Tuesday’s B&B preview video shows Quinn saying, “I can’t believe that I’m in control of everything…that Eric left ME in control.” Quinn is still trying to wrap her head around the news, but she knows what she has to do. The Bold and the Beautiful spoilers say Quinn will be determined to make decisions that Eric would be proud of.

Meanwhile, Eric’s condition will improve drastically. He’ll soon be awake and well enough to receive visitors. After chatting with his love, Eric will want to meet with Ridge (Thorsten Kaye). He won’t be pleased when he gets updates on Ridge’s deception.

Ridge will stand up for himself and his choices. He’ll argue that everything he did was for Eric’s protection. Eric won’t see things from Ridge’s perspective. It’s clear that there’s some major strife going on in the Forrester family. The conflict may heat up as Quinn puts her power to good use.

Elsewhere, Steffy (Jacqueline MacInnes Wood) will gripe about Quinn and her oblivious son. The Bold and the Beautiful spoilers say Steffy will feel like Wyatt (Darin Brooks) refuses to view Quinn as a real threat. She’ll just wish that Wyatt could see how dangerous Quinn is.

Steffy will point out that everything was too risky. She thought divorce was the only option. However, it looks like Steffy will start to change her tune. Perhaps Steffy will hear about Eric regaining consciousness. That might offer at least a little peace of mind.

Eric will undoubtedly monitor Quinn while she’s running the show at Forrester Creations. It turns out Wyatt will be taking on a new role as well. Eric will soon ask Wyatt to help Quinn steer the ship. He’ll think they’ll be a dynamic duo for the company.

Once Steffy realizes that the situation is changing, she could have some regrets about her decision to end her marriage. Steffy will also struggle with some guilt. After all, Wyatt didn’t want any of this to happen. He can’t help it if Quinn got involved with Eric.

Steffy may believe that standing by Wyatt would be the right thing to do. He’s Steffy’s husband and she promised to love him for better or for worse. Steffy might tell Liam (Scott Clifton) that she’s not sure her move was really for the best.

Of course, Liam will offer reassurance. He’s convinced they’re meant to be together. Later this week, Liam will tempt Steffy with the promise of passion and a Quinn-free life.

Will Steffy and Liam make love? Will that complicate Steffy’s return to Wyatt? Stay tuned to B&B and don’t forget to check CDL often for the latest Bold and the Beautiful spoilers, updates and news.