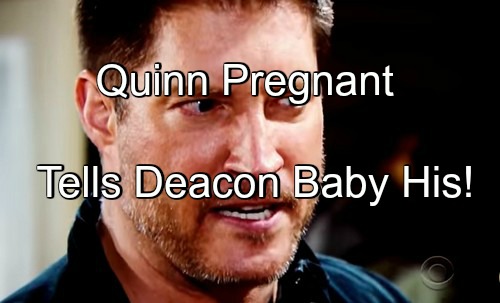 “The Bold and The Beautiful” (B&B) spoilers tease that Quinn Fuller (Rena Sofer) may be crushed that Liam Spencer (Scott Clifton) ran away from her as fast as he could, but she might have a souvenir from their twisted relationship… Is Quinn pregnant?

Quinn is busy convincing Deacon Sharpe (Sean Kanan) to run off with her and help her evade justice and the wrath of Bill Spencer (Don Diamont). Deacon will fight the urge but the dollar signs will eventually light up his eyes and no doubt he’ll go along with Quinn.

Right now, The Bold and the Beautiful spoilers say Quinn is scrambling to get away before the cops come for her and she’s trying to get Deacon to see her attempt to murder him as a misunderstanding. But once she and Deacon get away, Quinn will have time to think over her time with Liam (we can expect the usual B&B montages). 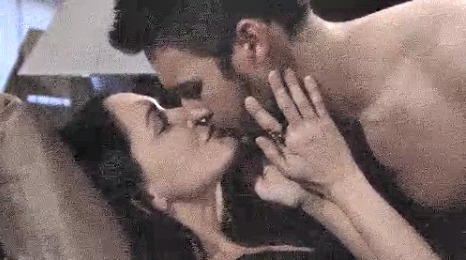 When Quinn finds out she’s pregnant with Liam’s baby, she’ll be overjoyed to have something that will link them together forever, but because of her circumstances, she may try to deceive Deacon into believing the baby is his.

Quinn needs to let Liam cool off about the kidnapping before she tells him that Adam and Eve made a baby. B&B spoilers say that letting Deacon believe the bun in her oven is hers will serve her purposes – at least for a while. There’s also the chance that Quinn might NEVER tell Liam they made a baby.

Quinn might focus on the baby in the same obsessive way she did with Wyatt Spencer (Darin Brooks). Now that Wyatt has taken Liam’s side, Quinn could set him aside and make her Liam spawn her sole priority in life. Is this history about to repeat itself?

Clearly Quinn is teetering on a line between her love fantasies about her and Liam being meant for each other and her sense of self-preservation. That’s where Deacon comes in. Quinn will twist him around and get him to agree to help her get away. 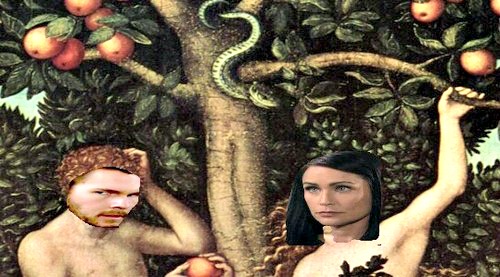 But then later, when Deacon has second thoughts about staying with Quinn and keeping her out of jail, the pregnancy is a trump card Quinn can use to keep manipulating Deacon for as long as she wants – but only if she can convince him that the baby she’s carrying is his.

Deacon does know that Quinn was sleeping with Liam, but doesn’t know how often (although it was a lot). But if Quinn can get Deacon to accept that her pushing him off a cliff was just a happy accident, B&B spoilers say that convincing him that he got her pregnant should be easy as pie for Quinn.

Ultimately, though, Liam will find out that they have a baby and sparks will fly. Could Quinn convince Liam to be with her again since they have a child? Perhaps. This would be much more likely if Steffy Forrester (Jacqueline MacInnes Wood) decides to stick with new hubby Wyatt.

What do you think B&B fans? Would you be excited about a baby for Quinn and Liam? Could a baby be a game changer for Quinn? Or just another tool for her to manipulate Deacon and Liam? Share your comments below and come back to CDL for more “The Bold and The Beautiful” spoilers and news.