The Bold and the Beautiful Spoilers: Week of November 14 – Jealous Rage For Quinn, Second Thoughts For Eric 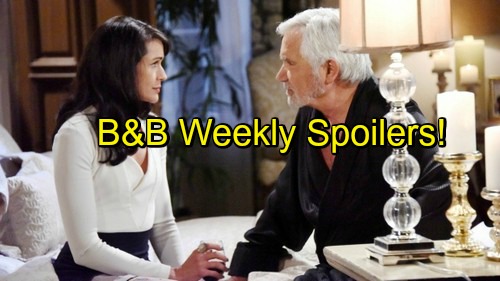 The Bold and the Beautiful (B&B) spoilers for the week of November 14 – 18 tease that Quinn (Rena Sofer) will face some highs and lows. First, she’ll be thrilled by the success of the fashion show. Quinn managed to overcome her doubts as well as Ridge’s (Thorsten Kaye) sabotage efforts.

Even Steffy (Jacqueline MacInnes Wood) will admit that Quinn brought her “A” game. The Bold and the Beautiful spoilers say Quinn will try to get everyone in her corner. She’ll hope that this could be the start of some teamwork at Forrester Creations. It won’t be that simple, but it’s a nice thought.

Unfortunately, Quinn won’t be on cloud nine for very long. B&B spoilers suggest that the green-eyed monster will cause some problems this week. Quinn will hear about Katie’s (Heather Tom) recent visits to the mansion. She won’t like the idea of Eric (John McCook) cherishing another woman’s company.

To make matters worse, Katie will decide to buy the house next door. Eric will give Quinn updates on Katie’s purchase and she’ll struggle to keep her rage in check. Quinn has turned from her wicked ways, but she could easily head back to the dark side. Jealousy tends to bring out a dangerous part of Quinn’s personality.

Meanwhile, Bill (Don Diamont) will also grow increasingly jealous. He wants to marry Brooke (Katherine Kelly Lang), but he can tell that she has some lingering feelings for Ridge. Nevertheless, Bill is trying to ignore his reservations. Brooke is the light of his life and he can’t risk losing her.

The Bold and the Beautiful spoilers say Bill will put pressure on Brooke. He’ll want to elope and put an end to the uncertainty. Of course, Ridge will continue to work his magic. He’ll rev up the romance and hope that Brooke will make the right choice. 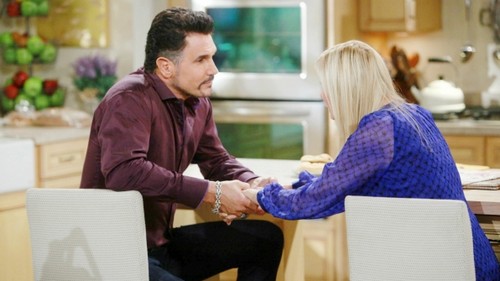 Brooke will have a lot to consider. She has a rich history with both Bill and Ridge. However, this is ultimately about Brooke’s future. She needs to decide which man she truly sees herself moving forward with. Someone’s heart is going to break, but that’s just the way it has to be.

For now, Brooke will probably maintain the status quo. She’s in no hurry to blow up this love triangle. The Bold and the Beautiful spoilers state that Bill will attempt to score himself a few points. He’ll spend a day with RJ (Anthony Turpel) and give the whole bonding thing a shot.

Elsewhere, tension will remain for Zende (Rome Flynn) and Nicole (Reign Edwards). Sasha (Felisha Cooper) and Zende’s hookup clearly rocked Nicole to the core. This double betrayal was almost more than she could bear. Nicole won’t want to deal with either of them. She still can’t get a grip on her emotions.

Will Nicole’s anger and pain fade over time? Will Sasha stir the pot again? We’ll keep you posted as other news comes in. Stay tuned to B&B and don’t forget to check CDL often for the latest Bold and the Beautiful spoilers, updates and news.