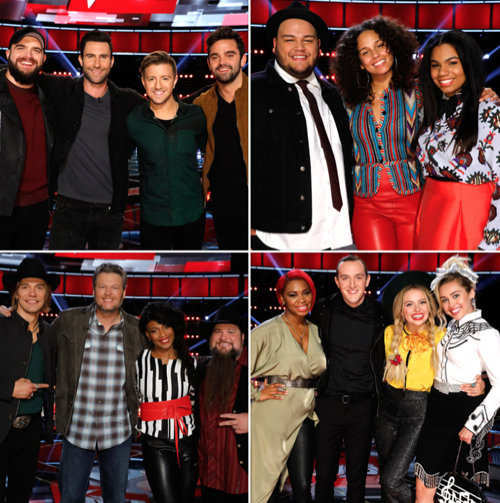 Tonight on NBC’s Emmy Award-winning musical competition The Voice airs with an all new Monday, November 22, 2016, season 11 episode 19 and we have The Voice recap right below.  On tonight’s The Voice episode, the top artists advance in a results edition as one artist is sent home.

Did you watch last night’s episode where the top 11 artists performed live in front of coaches Miley Cyrus, Alicia Keys, Adam Levine and Blake Shelton for America’s vote. Carson Daly hosted? If you missed the episode and what to find out what happened we have a full and detailed The Voice recap, right here for youThe Voice

On tonight’s season 11 episode 19 of The Voice as per the NBC synopsis, “It is the Live Results – Nine artists will be revealed as safe by America’s votes. The bottom two artists will then compete for the Instant Save and one will be eliminated. Who will make it to the Top 10 will be revealed.”

#VoiceResults starts with Carson Daly bringing the top 11 artists to the stage. Carson asks Brendan about his growth on the show. The first artist safe is from Team Blake and it’s Sundance Head. We’ McDonald from Team Alicia is also safe.

We’ McDonald and Sundance Head are safe

Team Blake sings The Heart of Rock and Roll, a cover of the 80’s song from Huey Lewis and the News. Blake sings with Sundance Head, Austin Allsup and Courtney Harrell. After the performance, Carson asks Ali about Miley as a coach and she talks about her embracing her desire to be different.

Carson then announces another two that are safe including, from Team Miley, Ali Caldwell who is now in The Voice top 10. The next announced safe is from Team Adam and it’s Billy Gilman, former child star, who moves on to the top 10. Seven are still at risk.

Team Alicia sings and Alicia Keys, Christian Cuevas and We’McDonald perform Curtis Mayfield’s People Get Ready. The seven take the stags. Carson asks Aaron about his performance last night and he says the song has deep meaning for him. Christian says he wants to show America his heart and dance moves.

Next declared safe is from Team Blake – Austin Allsup. He’s in the top 10. From Team Adam, Brendan Fletcher is safe and moves to the top 10. Both get hugs from tehir coaches and go take a seat with the others that moved on. Adam and Blake each have two in the top 10 and the ladies each have one.

Former Season 9 The Voice winner from Team Adam, Jordan Smith, sings O Holy Night. He brings down the house with his stunning performance. Adam presents him with a plaque for being the top selling artists from The Voice. Carson brings the artists out for more results.

Josh tells Carson and the crowd thanks for supporting him. The last three saved by America’s votes are: Team Alicia’s Christian Cuevas, Team Blake’s Courtney Harrell, and Team Adam’s Josh Gallagher. That means Miley’s Darby Walker and Aaron Gibson must perform for the save.

Darby Walker and Aaron Gibson sing for Instant Save

Carson introduces Team Miley’s Darby first who sings Elton John’s Your Song for her Instant Save. She gives it her all and Miley cheers for her. Alicia says she loves her story and who she is. She says she’s a beautiful crafter version of herself. Miley is bummed because two of her artists are at the bottom.

Miley says winning doesn’t mean the same thing for everyone and it means living her truth and being happy, you win. Now it’s Aaron who sings and then Miley says she can’t believe they are in this situation and she thought for sure he was safe.

She says the coaches thought he was one of the best of the night last night. She says she doesn’t know what America saw last night, but she saw perfection. Now it’s time to vote for an Instant Save for these two and it’s #VoiceSaveDarby or #VoiceSaveAaron.

Carson asks them for last words in case they leave. Darby thanks Miley for letting her come on stage and sing about things that matter to her and to be a free spirit. Aaron thanks Miley for being super amazing and opening up his world and her being such a good person.

Miley tells them she can’t believe this is happening and says they’re both important to the show. Miley tells Darby not to make her cry and thanks her for always being herself. Miley says she loves that Aaron makes her want to win by being a better person and loves that.

Darby is eliminated from The Voice and Aaron Gibson moves to the Top 10.