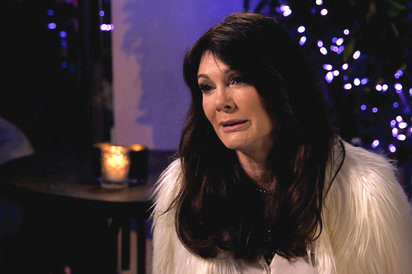 James found himself in trouble again on tonight’s episode of “Vanderpump Rules” and he really had no one to blame but himself. He was the one after all that had apparently used up most of his goodwill with Lisa. So she had been tempted to fire him after he had gotten into another altercation at one of her restaurants. However, she couldn’t. James had gotten mouthy with Edmund who had been Scheana’s wedding photographer yet it was Edmund that became physical by putting James in a headlock. And so Lisa had no other choice than to allow James to skate on this particular issue.

James might have had an attitude problem and admittedly that has gotten him into trouble before however she couldn’t hold someone’s reaction against him. But people at the restaurant were beginning to wonder how many chances did James deserve. James had caused several fights and problems wherever he goes plus he also had a drinking problem. So there has been times when James had even gotten mouthy with Lisa because he had been drinking and basically looking for a fight.

Yet, this last one technically hadn’t been his fault and so everyone just had to accept that James got away with his latest problem again. So there was some grumbling, but that hadn’t been the only problem to crop up There was also the issue that some of the ladies had with Lala for instance. Lala had seemingly developed a friendship with Ariana overnight and that was something Katie couldn’t forgive. Katie hates Lala and she had thought Ariana was her friend right up until she saw Ariana and Lala together.

So Katie decided to be petty with Ariana. She had invited all of her other female friends to a champagne brunch and she had asked them all to be her bridesmaids at the wedding yet the only person she didn’t want in her bridal party was Ariana. Katie later explained to Ariana that she knew that the other woman wasn’t that big into weddings and that’s why she didn’t ask Ariana to be a bridesmaid. Though that had been complete crap. Katie would have asked Ariana to be part of the group and she would have liked having Ariana at the brunch if Ariana hadn’t been Lala’s friend.

Lala though knew that Katie and some of the others had a problem with her. So Lala decided to be the adult tonight and she thought the best way to do that was to reach out to the enemy so to speak. Lala had talked to Scheana who had been a friend at one point and she had apologize for the things that she said because she realized that it had been a form of bullying. However, Scheana didn’t want to accept the apology seeing as she felt that Lala actually deserved to apologize Katie and so Lala had later tried to apologize to Katie.

Lala had asked to speak to Katie for a minute and then she told Katie that she regretted some of things she said as well as did in the past however Katie didn’t want to hear it. Katie had believed that she was better than Lala who she claimed whored her way into getting finer things and so she repeatedly insulted Lala as the other woman was attempting to apologize to her. So Lala chose to get real for a second. She said that Katie had said some horrible things to her and asked if she had only had a problem when Lala retaliated. But Katie denied that.

Katie had said that Lala was the one that started things and so Lala tried to push back. Lala had told Katie that she was the one that called her a whore and that was something that Katie neither denied nor wanted to. Katie apparently believed that she called it like she sees it and so that had been the end of whatever apology Lala tried to give her. Yet, Katie had talked to her fiancée afterwards and she had told Schwartz that Lala tried to apologize to her, but she naturally put a spin on that apology because Schwartz was sometimes a better person than she was.

Schwartz had truly been happy that Lala had apologized because he thought that maybe they could finally put the drama behind them and move on. Though it turns out there was no moving on with Katie. Katie had called Lala’s apology fake and privately she had questioned Scheana’s loyalty because she had seen far too many friends get chummy with Lala. So Katie told the others about what she had seen at her house party that night. Katie had told Stassi and Kristen that she had seen Scheana laughing with Lala on the same night as the apology and of course that got their backs up.

They had all said that Scheana’s first loyalty should have been with Katie because Katie had gotten hurt by the things that Lala did. So they didn’t understand why Scheana would go behind Katie’s back and laugh with Lala. However, Scheana didn’t actually betray her friend. Scheana was still keep her distance away from Lala outside of work and she had been truly worried about Ariana because she didn’t want Ariana and Katie’s relationship to be permanently ruined by Ariana’s friendship with Lala.

So Scheana had told Ariana the story about what happened when Lala attempted to apologize and how Katie couldn’t trust someone that was dishonest in their personal life to be honest with her. But Scheana felt differently about loyalties when it was Katie that was questioning her and saying that she saw Scheana laugh with Lala however Scheana claims that never happened and doesn’t know why Katie was suddenly angry with her.