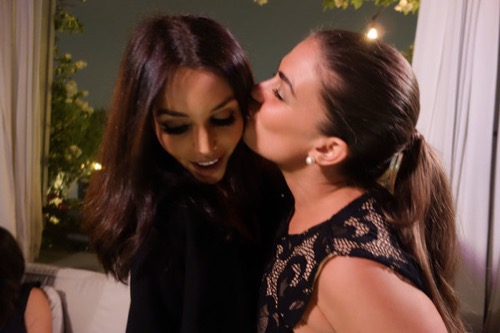 Did you watch the last episode where Jax spread a shocking rumor, jeopardizing the best relationship he’ ever had, in the Season 5 premiere. Also: Stassi mobilized the ladies against James and Lala following a fat-shaming incident and scandalous gossip was unearthed about Lala?  If you missed the episode and want to get caught up before tonight we have a full and detailed Vanderpump Rules recap, right here for you!

On tonight’s Vanderpump Rules as per the Bravo synopsis, “Lisa Vanderpump plans a canine charity with help from the SUR gang and Katie as her assistant. Then, Brittany threatens to leave Jax for spreading rumors about her; James goes on an “apology tour”.”

Lisa had wanted to celebrate World Dog Day this year with a little more fanfare that she ever has. So she roped in some of her staff from Sur and they were willing to help however Lisa’s familiarity with some of them had led to her saying something embarrassing. Lisa for instance, had found out that Kristen was coming to her charity and she said fine because she heard that Kristen could be very giving. But hearing that had mortified Brittany. Brittany was the new girl at Sur and she never would have wanted her boss to hear the rumors that her boyfriend started.

Jax has been telling everyone that he saw Kristen giving his girlfriend Brittany oral sex. However, Brittany swore that never happened because she said that all she did was kiss Kristen and that they had been drunk. The two women had been hanging out and drinking so they had admitted to taking things a little far though they both said that they had been in the right sort of mind to stop. So neither of them could understand why Jax started that rumor and it was personally hurting Brittany.

Brittany wasn’t like the others or even like Jax. She had a family back home that she never wanted to embarrass and she felt that Jax was doing that. Though the only one that doesn’t get that Brittany was hurting was Jax. Jax claimed that it was funny when he was in front of Brittany and then in his confessions he doesn’t back down. He still believes that he saw his friend giving his girlfriend oral sex. So nothing could convince him otherwise yet it was usually Jax that cheated on his girlfriends and he had almost did that last season with Lala.

Jax and Lala had gotten into a pretty intense flirtation when he first started dating Brittany. So Jax had actually crossed a line and Brittany had forgiven him because most of the blame had fallen on Lala. Lala was the one that didn’t wish to hide her sexuality and she didn’t, but Lala also said that nothing would have happened if Jax had been completely honest with her about having a serious relationship. Yet, a lot of people still hate Lala for some reason. Katie, Kristen, Scheana, and Stassi all hated her for one reason or another and so they started gossiping about her.

The current gossip on Lala was that she was “dating” a married man who also was acting as her sugar daddy. So a lot of the time Lala lashed out at the people that were being crude to her however she saw her mother recently and she admitted that she didn’t like some of things she says. Lala had felt that the insults were demeaning. She didn’t like saying them and she instantly regretted what she said right afterward. But Lala apparently has a history with group mentality and that’s why usually strikes first.

Lala as it turns out, had been bullied when she was younger and so that time when they all made her out to be a whore in Hawaii had stuck with her. They had been cruel and judgmental. So She had actually cried in her hotel room all night and it had taken everything from her true friends to get her to calm down. However, one of the things that she likes about James was that he knew what it felt like to be hurt and he didn’t judge her. James had also been insulted by Jax and practically the whole group and it still stuns him that they took back Kristen.

One of the things that had ostracized James had been his relationship with Kristen. So he could understand where Lala was coming from and she probably knew why it hurt for him when he had to apologize. James had been told that he needed to apologize for the things he said because Lisa had found out what happened at the bar last week and demanded that he not cause drama amongst the staff. Which was a little laughable yet James apologized all the same. He apologized to Scheana who barely accepted and he tried to apologize to Katie.

Katie was the one he accused of being pregnant and he had only did it to get a rise out of her. Though Katie ended up having the last laugh because it had been her that had complained to Lisa and had ultimately forced Lisa’s hand. Katie was apparently trying out to be Lisa’s newest assistant and she had wanted to make a great impression on Lisa at the World Dog Day Charity Event. So Katie could have gotten into an argument with James when he came to apologize to her however they both decided to play it safe.

Katie had told him that she thought he was a horrible person and he had pretended not to truly believe that she was fat. Yet, Katie was auditioning at the time and planning her wedding while James had already gotten in trouble on that very same day. James had had a drink with his friends when he went on break at Sur and one of those friends had put him in a very public chokehold or headlock (no one knows what happened). So Lisa was finally beginning to get fed up with James. If it wasn’t one thing then it was another and only James couldn’t see where he went wrong.

James had originally been pushed out because he purposely pushed everyone else away. He first did that by dating Kristen of all people and then he did that with his attitude. He later swore to Tom and Lisa that his friend had put him in chokehold or headlock because that friend had been jealous. Jealous of what he’s accomplished and so had wanted to tear him down. Though what has James accomplished. He was a resident DJ at a restaurant and he had come out with an album as well as a single he had performed with Lala. So there was no reason to be jealous.

James was just someone that could be emotionally vulnerable at times and a jerk when he’s in the wrong. However, the beef that he had with the group was a two way street. Tom was one of the few that could look pass what James has done or said to him though everybody else swore that they had never been so offended. So it was a bit funny that the same group that hated outsiders was slowly getting ripped apart because of a rumor. An internal rumor that was started by Jax and that Kristen had to basically call him out before he stopped saying that he saw something that he didn’t.

That part is still unclear!