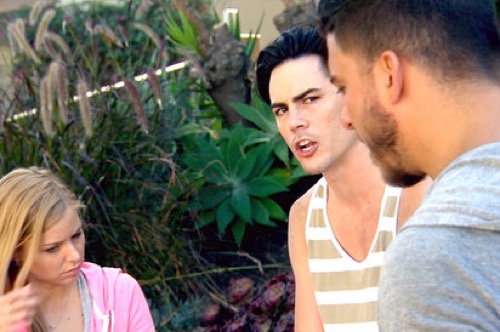 Tonight on Bravo Vanderpump Rules returns with an all new Monday February 22, season 4 episode 17 called, “Beach, Please” and we have your weekly recap below. On tonight’s episode, after Tom Sandoval forces Jax Taylor to answer for his recent bad behavior, Jax cheers himself up by buying Brittany a boob job. Lisa Vanderpump is faced with a big decision when James Kennedy makes a scene at PUMP.

On the last episode, while the SUR crew parties in Hawaii, Stassi visited Kristen in LA and finally revealed the truth about her sex tape. Ariana rejects Scheana’s fake apologies, and Tom striked back with an attack on Scheana’s marriage. Lala kicked James out of bed for an equipment malfunction, Scheana worried about Shay’s drinking, and just hours before leaving paradise, Jax winds up in jail. Did you watch the last episode? If you missed it, we have a full and detailed recap right here for you.

On tonight’s show as per the Bravo synopsis, “after Tom Sandoval forces Jax to answer for his recent bad behavior, Jax cheers himself up by buying Brittany a boob job. Lisa is faced with a big decision when James makes a scene at PUMP. Sandoval lasers the tattoo off his butt, Katie’s beach party gets even hotter when Kristen and Ariana have it out, and Ariana makes a stunning statement that leaves both Scheana and Katie speechless.”

Tonight’s episode is going to be another drama packed one, which you won’t want to miss. So be sure to tune in for our live coverage of Bravos’ Vanderpump Rules season 4 episode 17 — tonight at 9PM EST! While you wait for our recap, hit the comments and let us know how excited you are about this new episode of VR tonight and what you think of the current season so far.

Jax had crossed a line last week but apparently he still found a way to run from responsibility on tonight’s episode of “Vanderpump Rules”.

Jax it seems had told Scheana that he had gotten into a fight with Tom and Ariana because Tom wouldn’t stop talking about his band. And so Scheana had reiterated that story when she later went lingerie shopping with both Ariana and Katie. But Ariana refused to let Jax’s version of events be the only one out there.

So she told the ladies what had really happened and how Jax has gotten out of control lately. She told them that Jax had gotten into a drunken scene where he accused Tom of trying to steal his limelight. And, while that story could have sounded a bit there, it was what had actually happened. Which was the sad part.

And after Ariana had finished shopping with the ladies, she then called Tom to tell him what Jax had been saying about the both of them. So that had sent Tom off even though he had kind of understood where Jax was coming from because what you must remember is that Jax and Tom have been friends for a long time. And therefore Tom knew that Jax must have been embarrassed following their fight.

Thus Tom later asked Jax to come over to supposedly help move his old coach when really what he wanted to do was talk to the other man about the night of their fight.

Tom told Jax that he had heard the stories from Scheana and he tried to explain that their fight hadn’t occurred because of his band. Yet Jax swore up and down that Tom had been the one to start things by bringing up his band. So he and Tom got into an argument about what happened and it ended with Jax believing that Ariana must have poisoned his friend somehow because Tom never would have taken things so seriously before he met her.

Although Jax had pretty much put the fight behind him when it came time for Brittany to have her surgery because Jax was funnily enough more excited about Brittany’s boob job then she could possibly be. So he was front and center on surgery day. And the only reason he eventually left her by herself, albeit for a short time, was because he wanted to be at the beach for Katie and Schwartz’s engagement photos.

The same photos that Schwartz hated to think about, but that was making Katie put her foot down with her fiancée.

Apparently Katie what to turn her engagement photos into a fun day at the beach with the people they work with. So she was making a day out of something that Schwartz had dreaded and surprisingly the photos that she had commissioned turned out to be really good. And few of their friends had even thought it was cute.

And so it had been a pretty good day at the beach until someone mentioned that they had seen Kristen in her new comedic sketch. Ariana it seems hadn’t known that Kristen was moving into comedy and, well, she might have gotten territorial about that because she had trained for years in comedy meanwhile someone like Kristen probably just picked it up on a whim.

But things got pretty nasty when Ariana began to shoot down the sketch she had never seen and just finding new ways to insult Kristen as well as her comedian friends. So Ariana had finally pushed Katie too far and Katie decided to address what was really going on. Namely the tension within the group that had all been pretty much ignoring until that very moment.

Katie, you see, had said that she was tired of pretending that nothing was wrong when obviously Ariana had a problem with her and Scheana still hanging out with Kristen. Yet, it was Ariana that then she was tired of pretending that she still wanted to hang out with them at all. So, while she may not have meant to drive everyone away, Ariana did ostracize herself when she basically told people she was sick of being around them.

And you know what happened next? Kristen showed up and Jax, who had his own issues with Tom and Ariana, soon told her everything that Ariana had said about her.

So that led to Kristen getting into another fight with Tom and Ariana. With one side throwing things from the past into the other face and Kristen of all people having to be the only one to mention the latest if not bizarre incident. Though, after everything he set in motion, Jax eventually did realize that he might be pushing friends away with his actions. And he said that he wanted to be a better person before it costs him the people he loves.

And maybe he should start by not rattling any cages with gossip.

But you know who did stay out of the drama at the beach? James! James was newly fired from Pump for causing a drunken scene after seeing Kristen at his event and still he managed to show restraint at the beach. And let everyone else argue while he hung out with his friends. Being the few people that ended up enjoying themselves.