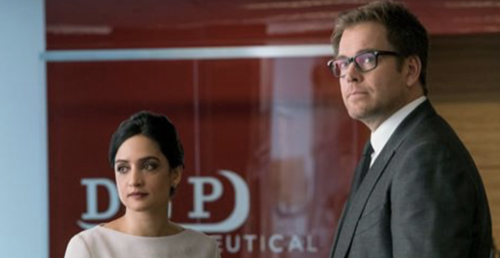 Tonight on CBS their  drama Bull inspired by Dr. Phil McGraw airs with an all-new November 14, 2017, episode and we have your Bull recap below.  On tonight’s Bull season 2 episode 8 as per the CBS synopsis, “Bull agrees to help the parents of a former employee sue a drug company when their son commits suicide during a drug trial. However, the task is complicated when the company brings in their own trial scientist.”

Simon arrives at the office to deliver the gang food. Things are uncomfortable for him and everyone. Cable walks him to the elevator. He used to work with them as an assistant trial scientist before he just stopped coming to work, changed his phone number and stopped talking to Cable. The two were dating until he just disappeared. Cable wants an explanation from him but he has a tight deadline to make his next delivery and a $30 bonus. He doesn’t make it on time. He jumps from the top of the building in front of a birthday full of kids.

Cable comes in to see Bull. She tells him about Simon and the antidepressants he was testing for a pharmaceutical company. She knows it was the drug and not him. His parents are suing and she wants Bull’s help in stopping the drug from hitting the market and to bring Simon’s parents peace.

Bull pays a visit to an executive by the name of Arti at the drug company. He informs her that they can settle on behalf of Simon and his parents or they can go to court. She tells him that they won’t be settling. She will see him in court. Before she leaves, she informs Bull that she isn’t an executive for the drug group but a trial scientist for the company just like him. Bull and Benny are shocked.

Bull sits in his office, researching Arti. The team gets together to talk over the case. The next day, Bull finds Arti outside of court and tells her he has brushed up on who she is. In court, Bull tells Benny and Marissa that they are looking for people who trust big corporations. As Benny questions the pool of jurors, their strategy confuses Arti. Jury selection goes quick. Outside of court, Arti asks Bull what he is up to. He laughs and keeps the mystery of his plan.

Simon’s mom takes the stand. She explains that he wasn’t himself when she spoke to him last. The prosecution gets up and accuses her of not being close to Simon.

The team tracks down another participant in the same trial. He agrees to go to court and take the stand. He explains how the drug made him dread everything. He felt like he wanted to kill himself. But he stopped himself and quit the trial.

The prosecution accuses the participant of not waiting long enough between trials before he began taking their drug. The participant reveals that Simon was also on the same trial. Both of them did not wait the 30 days, starting the drug on day 27. Bull is taken by surprise.

Back at the office, Bull is angry. They don’t have another witness and they can’t track down Simon’s emergency contact by the name of Tom Griever. Cable apologizes for asking him to take the case. He is harsh, telling her he regrets it too before leaving for his office.

The next day at court, the defense calls Tom Greaver. Bull is shocked again that they found him and Cable couldn’t. Tom takes the stand and reveals that Simon overdosed on heroin when they were in college. His mother, who is a nurse, saved him with Narcan. All of the jurors are on the side of the defense, Marissa tells Bull. Cable rings in. She wants them to take a recess. She found out something damaging about Tom.

Cable brings Benny and Bull the files. They return to the courtroom. Benny talks to Tom, telling him that he knows he is formerly Tom Belmond. He changed his name because he has a lengthy history of arrest for drugs and more. The jurors begin to shift towards a win for Simon.

Chunk goes looking for another participant at a homeless shelter. He discovers the man hung himself three and a half weeks prior. A woman came weekly to give him the medication and money. When she arrived to find him dead, she paid for his cremation expenses.

The CEO of the drug company takes the stand. The jurors warm to her. She brags that her company has no blemishes on their record when it comes to drug trials. Benny takes the floor and questions the CEO, asking her about the other suicide, the man who hung himself. She denies any correlation between his death and her drug. Benny asks the CEO if she did, in fact, pay for the cremation. The defense stands up quickly asking for a recess so that they can speak with the other side. They want a settlement.

Bull and Arti share a drink and talk about the trial. Bull toasts to great minds.