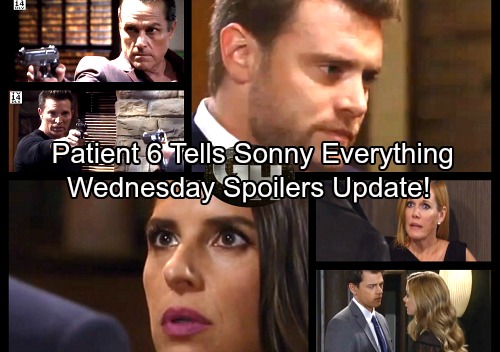 General Hospital (GH) spoilers for Wednesday, October 25, tease that Sam (Kelly Monaco) will worry about the big bash. She’ll don her dress and prepare for the media company’s launch party, but she’ll fear that this could be a mistake. Sam will suggest that they might be asking for trouble. She’ll open up to Jason (Billy Miller) about her concerns, but he’ll contend that everything’s going to be fine. Little does Jason know things will be anything BUT fine!

Jason won’t think they need to fret about the wiretapping on their special night. He’ll think this should be an evening of celebration. Unfortunately, the shindig will take a dangerous turn later this week. In the meantime, Sonny (Maurice Benard) will get an explanation from Patient Six (Steve Burton). He’ll listen as Burton’s character describes the horrific ordeal he’s been through.

It appears Sonny will begin to trust Patient Six by the end of their chat. Alas, trust seems to be shattering between Michael (Chad Duell) and Nelle (Chloe Lanier). Now Michael’s learned that Nelle spend nearly a year in a mental institution. He’ll confront her on Wednesday’s episode in hopes of learning more.

Michael feels like Nelle is keeping crucial aspects of her life under wraps, but she might argue that she didn’t owe him that info. Nelle might contend that after everything she went through, she simply needed some help. Once they’ve debated this, Nelle will make herself clear. She’ll insist that Michael has to stop digging for details on her history.

What else could Nelle be hiding? How much worse could things get? GH fans will soon find out! Across town, Ava (Maura West) will mull over the sketch of classic Jason. She knows he looks just like Patient Six, so she’ll wonder if she can prove they’re the same person.

Griffin (Matt Cohen) will sense that something’s up with Ava, but will she be willing to share? Meanwhile, General Hospital spoilers say Nina (Michelle Stafford) will consider Maxie’s (Kirsten Storms) proposal. In the steam room, the ladies will discuss the proposition and Nina will decide if she’s willing to make Maxie an offer.

This undoubtedly relates to the Ask Man Landers drama. Maxie suggested that she was going to take advantage of her situation. She must’ve come up with a deal that could help her career. At GH, Amy (Risa Dorken) will ask how Nathan’s (Ryan Paevey) conversation with Maxie went. She’ll assume Nathan told her that he was putting his Man Landers days behind him.

General Hospital spoilers say Nathan will continue the ruse after all. Since Maxie’s excited about the future, perhaps Nathan didn’t have the heart to tell her. Is this scheme headed for disaster? We’ll give you updates as other GH news comes in. Stay tuned to the ABC soap and don’t forget to check CDL often for the General Hospital spoilers, updates and news.