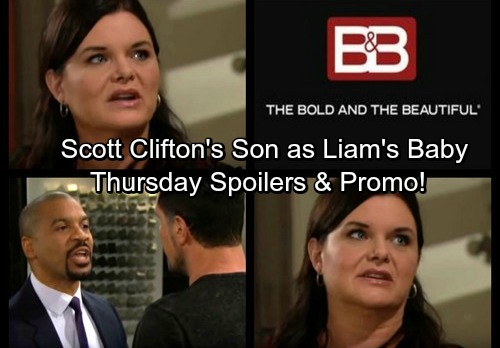 The Bold and the Beautiful (B&B) spoilers for Thursday, December 28, tease that Justin (Aaron D. Spears) will push Bill (Don Diamont) to share his feelings. He can tell that something strange is going on, so he’ll try to find out how he can help. Bill’s ready to burst over his love for Steffy (Jacqueline MacInnes Wood). He’ll determine that he has to tell someone he can trust. Justin will be the ideal confidant.

Bill’s emotions will come pouring out during this deep conversation. He’ll admit that he fell hard for Steffy and they indulged in a night of passion. Justin will rip into Bill for making such a terrible mistake. He’ll wonder why in the world Bill would get caught up with Steffy. Justin will contend that Bill could blow all the progress he’s made with Liam (Scott Clifton), but Bill will think everything’s under control.

Steffy and Bill believe the paternity test results have eliminated their problem. The Bold and the Beautiful spoilers say Bill will fill Justin in on Steffy’s baby. He’ll confess that he thought it might’ve been his, but the doctor confirmed Liam as the father.

It’s possible that B&B will pull a fast one and make Bill the “baby daddy” later, but Steffy will be relieved for now. She’ll have a fantasy about the perfect family she’s going to have with Liam. The Bold and the Beautiful spoilers say Scott Clifton’s real-life son will play Liam’s kid on Thursday. One-year-old Ford Clifton will make his debut in a flashforward daydream.

In a Soap Opera Digest interview, proud Papa Clifton dished on his boy’s short stint. “It’s a lovely, rosy fantasy with Liam and Steffy playing with their future child, who happens to look just like Liam,” said Clifton. When one of the producers suggested using Ford for the role, Clifton had an enthusiastic response. He immediately gave them a “Heck, yeah!” 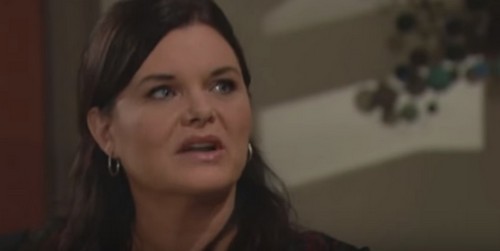 Clifton joked that it’s never too early to start developing a strong work ethic. Ford mostly plays on the slide and laughs in his scenes, so he’s not working too hard! It should be fun to catch a glimpse of this cutie.

Katie (Heather Tom) will also give Thorne (Ingo Rademacher) a pep talk in Thursday’s episode. She’ll insist that he’s quite a catch and any gal would be lucky to have him. Will Katie decide she wants Thorne down the road? We’ll give you updates as other news comes in. Stay tuned to B&B and don’t forget to check CDL often for the latest Bold and the Beautiful spoilers, updates and news.