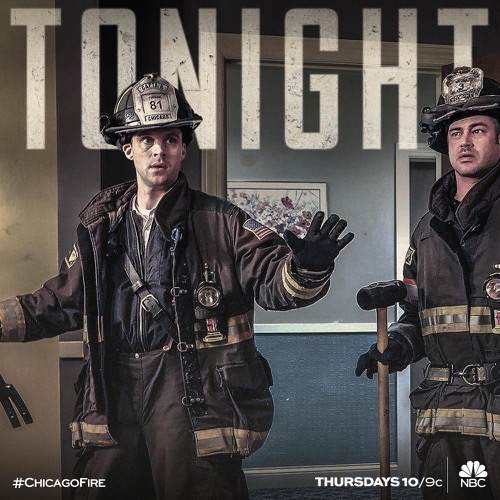 Tonight on NBC Chicago Fire returns with an all new Thursday, April 12, 2018, season 6 episode 18 called, “When They See Us Coming” and we have your Chicago Fire weekly recap below. On tonight’s Chicago Fire episode as per the NBC synopsis, “When the FBI takes over Firehouse 51 for an undercover mission, Casey and Severide volunteer to assist with the investigation. Kidd attempts to help Severide come to terms with recent developments he’s been managing.”

Tonight’s Chicago Fire season 6 episode 18 looks like it is going to be great and you won’t want to miss it.   While you’re waiting for our recap make sure to check out all our Chicago Fire recaps, news, spoilers & more, right here!

Kelly and Stella are sharing a meal with his parents at a deli when his mother asks why they didn’t just tell her that they were seeing each other. Kelly seems uncomfortable, his father asks if they can have dinner the following night together, Kelly says they have a fundraiser.

At the station, Matt asks Otis about his physio and hopes he is doing ok. The alarm goes off and when the crew drives the trucks out, a fleet of black vans pull up into the garage. Chief Wallace goes into the garage and asks the guys who get out of the vans what is going one, it is the FBI and they need to take over the firehouse.

A violent fugitive murdered a federal agent and his brother lives across the street from station 51 so they staking out until he returns home. FBI tells the crew to stay put, Chief Walace tells them they have their cooperation. Stella speaks to Kelly about the invitation dinner, asks him if he would change his mind, he says no and if she wants to go with them, then she can.

Agent Cotez asks Kelly to go with her to see her boss – they have a photo of the guy’s brother, they show it to Kelly, Matt, and Chief Wallace but nobody recognizes him. Matt and Kelly go over to the building to visit someone they know in there and to take a look around. Matt talks to Hector and Kelly go a few doors down and listens when a man opens the door.

Kelly tells the man that he is there to inspect fire extinguishers. Kelly notices a woman and child in the apartment and guns. Kelly’s dad comes to the station and he knows right away that the guys there are feds, he asks Gabriella what station 51 got themselves into this time.

Kelly’s dad goes to his office and tells him to lighten up. Kelly tells him that he is worried about his mom, he will just break her heart again. The two start arguing, Kelly calls his father old and weak and his mother deserves better. His father tells him he is not worth the energy. Tay comes to see Joe and the FBI sends him packing; Joe is not impressed.

All of a sudden a brick is thrown through the window, it turns out it was Tay. The fugitive’s brother has arrived at the building, Tay is worried he is going to go to jail for what he did, Joe tells him no, he is keeping him at the fire station to keep him safe and he promises everything will be ok. Joe starts to help him with his homework. The FBI is mapping out a way to get the fugitive’s brother – the want to storm in but Matt and Chief Wallace are worried about the woman and child in the apartment. Matt says there is another way, the FBI should disguise themselves as fire fighters, people trust them.

Matt calls his friend in the building, tells him to pull the fire alarm. The crew heads over to the building with the FBI dressed as firefighters and Kelly leads them to the apartment. Kelly bangs on the door and there is no answer, just before he is about to break it down, the door opens. Kelly tells them that the building is on fire and they need to leave, the guy refuses to cooperate even though the woman makes it clear that she wants to get out with her child.

Kelly pushes through the door and once inside, one guy pulls a gun out and points it at Kelly. There are two men in the apartment and they take Matt and Kelly out of the apartment with guns pointed at them. They walk down the hall and the FBI take action, Kelly and Matt are fine, the two guys are short dead. The crew is at the bar enjoying drinks when the head of the FBI comes in and announces that he is picking up the tab. Kelly and Stella arrive home to find Kelly’s mom crying, her husband broke it off with her, he said he is not good enough for her and it was for the best.

Kelly looks guilty and tells his mom it is his fault, she agrees and says she knows his father could not come up with this on his own. Kelly says that he is sorry, his mother says she is leaving and going back home.