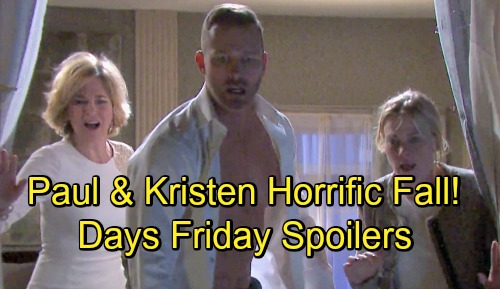 Days of Our Lives (DOOL) spoilers for Friday, August 31, tease that chaos will erupt at the Salem Inn. Kristen (Stacy Haiduk) managed to seduce Brady (Eric Martsolf) with a little help from a hostage situation. Of course, Brady seemed to be enjoying it on some level. As we’ll see in the coming weeks, Brady’s desires still burn bright!

The duo will become a trio thanks to Paul’s (Christopher Sean) arrival. He’ll certainly have questions about the scene in front of him. Sami (Alison Sweeney) and Eve will also join this unpleasant party. Days of Our Lives spoilers state that a huge fight will break out. Paul and Kristen will end up wrestling for control of a gun. They’ll inch near the window, which is obviously a terrible idea.

DOOL fans can expect Kristen and Paul to crash through the glass. This is apparently an awful pattern for Ms. DiMera! The pair will take quite a tumble, so there’ll definitely be some injuries. It appears like Paul will get the worst of it. Days spoilers reveal that he’ll struggle to stay alive at the hospital next week.

In the meantime, Steve (Stephen Nichols) will give John (Drake Hogestyn) a pep talk. Things still look bleak for Marlena (Deidre Hall), but Steve won’t want John to lose hope. He’ll assure his pal that John and Marlena are meant to be. They’ll both try to have faith that Marlena can pull through.

Unfortunately, these will be Nichols’ final scenes on the NBC soap. Contract negotiations broke down, so Days was forced to come up with a rushed exit. Steve will be arrested for espionage off screen, so allow us to explain. It turns out Steve’s bionic eye may be more trouble than its worth!

Ever since he received it, recordings have been made of all Steve’s ISA files and other classified info. Everything Steve’s looked at has been logged in a computer somewhere. He became an inadvertent spy, which put some very important people in jeopardy. Steve will be hauled off to jail, so Kayla (Mary Beth Evans) will inevitably battle additional guilt soon.

It sounds like some tough moments are ahead in Salem. We’ll give you updates as other Days of Our Lives news comes in. Stick with DOOL and don’t forget to check CDL often for the latest Days of Our Lives spoilers, updates and news.