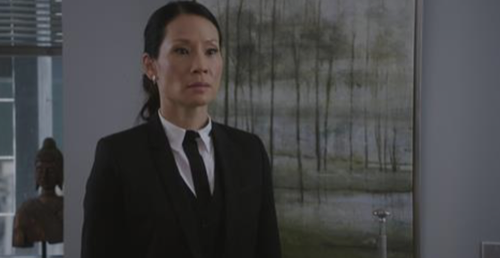 Tonight the CBS series Elementary airs with an all-new Monday, May 28, 2018, season 6 episode 5 and we have your Elementary recap below. On tonight’s episode called, “Bits and Pieces” as per the CBS synopsis, “Holmes and Watson retrace Holmes’ steps after he finds himself in possession of a severed head and no memory of the past six hours or why he has it.”

Watson and Marcus pay a visit to the producer of a play who is a suspect in the murder of a woman named Victoria. She was well known for her reviews of the arts. The producer admits he and Victoria had a conversation recently where she promised a good review for money. He wired her the money on the day she was murdered not knowing she had been killed.

Watson arrives home to see Holmes. He cannot recall the last 6 hours. He came home carrying a bag with a human head in it. Watson is shocked when she peers in. Holmes has no idea where he got it. Holmes tries to retrace his steps.

Holmes heads into the office to tell Gregson. Watson has stayed behind to wait for the coroner. Gregson is angry Holmes has withheld his post-concussion diagnosis from him. He blames himself. He always allowed Holmes to act above others in the department. He demands he be treated like everyone else.

Holmes comes home to tell Watson he needs to be cleared by Gregson’s appointed doctor before he can work. Watson tells Holmes about how their victim was recently in a car accident that required her to get a skin graft.

Watson and Marcus head to Victoria’s doctor office. An employee offers them a peek at her file. She also let Holmes look at the file the day before. The donor of the skin graft fits the stats of the man whose head Holmes ended up with. They look closer at the files. The donor paperwork looks like it has been rubber stamped by the lab. Strangely, they realize that Victoria and one other received skin from the same skin donor and both wound up dead.

They visit the man who own the lab supplying the grafts. Mr. Voth is angry. He tells them one of their associates was in yesterday accusing him of wrong doing and he stole something from him. Marcus asks him if it was a head. They accuse Voth of possibly having the 2 recipients killed to avoid a lawsuit for compromised tissue. They tell them to get a warrant.

Watson comes home to see Holmes running on the treadmill. He is trying to get better as fast as possible. Watson updates him on the case. The head has no connection to the case. Holmes has done some research. Dentists use heads for practice with implants. The door bell rings. It is Michael. Holmes is uncomfortable and short with him. He has swung by after looking up his address to see how he is.

Watson and Marcus talk to the lab. One tech tells them about three Asian women who arrived in the US with bird flu. Marcus draws a connection to the male recipient and then to Victoria. One of the Asian women was dating the male recipient. This proves that the Voth had them killed. They call him to the station with his lawyer. He admits to tampering with the evidence. Marcus interrupts. He has discovered through the brother of the male recipient that he was never sick, although he did tell him one of his students died. This proves that Voth didn’t have him killed. There was no reason to.

Holmes and Watson go over the case. Holmes suggest that the recipient Eric may have been asymptomatic. They get to talking. Watson thinks Holmes needs to apologize to Gregson. Holmes doesn’t see why he should have to.

Gregson and Marcus call the man who sold tissue to Voth’s bank. He admits that he does backdoor deals with a lot of funeral homes. He was in Cancun at the time of the murders.

Michael is at a meeting. He talks about Holmes without revealing his name. He cannot stop worrying about him. He gave him a case to pull him back in, he tells the group. If he needs to get louder he will.

Marcus and Watson pay her a visit the next day. She denies it all but they already have the evidence, Eric’s spleen was found in her freezer.

Gregson clears Holmes to return back to work. He isn’t happy about it. If it where up to him he would sideline him. But the doctors have cleared him to return as long as he attends his mandatory appointments.