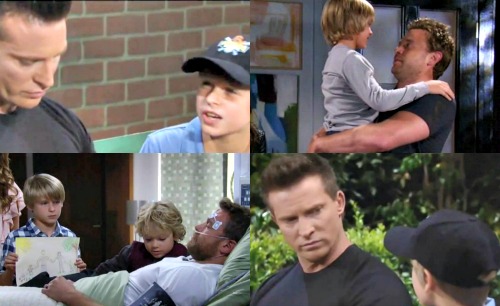 General Hospital (GH) spoilers tease that two brothers could be inching toward peace. Jake Spencer (Hudson West) recently pulled off a bit of a parent trap. He surprised Jason Morgan (Steve Burton) by inviting Drew Cain (Billy Miller) to use his extra ticket to the baseball game.

Jake suggested that he wanted to spend time with his two dads. Drew’s technically his uncle now, but they still share a nice father-son bond. Despite the awkwardness, Jason insisted that they both love Jake and that’s what matters. Since the game was canceled anyway, Drew decided to bail and let Jason spend some time with his son. It was a sweet moment all around.

This seemed like a significant turning point for Drew and Jason. There’s been plenty of tension between them, but things could be changing for the better. It’s still early in their relationship, but this may be the start of a brotherly bond. That’s something many GH fans would like to see.

Now that Sam McCall (Kelly Monaco) and Drew have finalized their divorce, they’re both ready to move on. General Hospital spoilers say Drew will grow closer to Margaux Dawson (Elizabeth Hendrickson), so the inevitable “JaSam” reunion should be easier to swallow. Perhaps Drew can get past any lingering feelings of jealousy or resentment.

Jake would love to be able to bring the family together. As Drew becomes more open to the idea, it could help Jake and Jason’s bond grow stronger, too. Of course, Jake also has a solid connection with soon-to-be stepfather Franco Baldwin (Roger Howarth). He’d be thrilled if Jason could connect with Franco as well, but it’s doubtful that’ll ever happen. The best Jake can hope for is toleration!

As for Jason and Drew, there was another crucial shift at Michael Corinthos’ (Chad Duell) wedding to Nelle Benson (Chloe Lanier). They were definitely on the same page about watching out for Michael and keeping him safe. General Hospital is finding ways to bridge the gap between these brothers, so that’s fantastic news. Let’s hope this trend will continue in the coming months.

If we’re lucky, maybe Drew and Jason will share the next Quartermaine Thanksgiving pizza. The holidays tend to bring soap families together, so keep your fingers crossed! We’ll give you updates as other GH details emerge. Stick with the ABC soap and don’t forget to check CDL often for the latest General Hospital spoilers, updates and news.