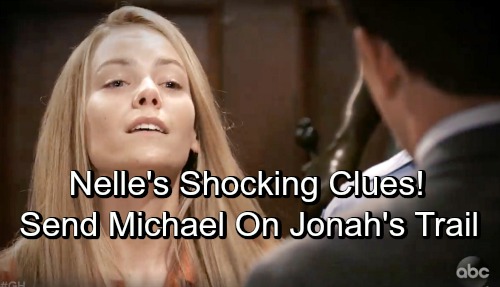 General Hospital (GH) spoilers tease that Michael (Chad Duell) will battle his nerves. That could be due to a brief visit with his manipulative ex and “baby mama.” Nelle (Chloe Lanier) will pop up by the end of the week and she’s enough to put anyone on edge.

Of course, Michael may not be nervous beforehand. Seeing Nelle in person again could make him uneasy, but he’s got the upper hand here. After all, she’ll be in handcuffs and an orange jumpsuit! Michael will even declare that Nelle looks appropriate. He’ll be glad to that she’s paying the price for her actions.

Instead, Michael’s anxiety could hit after their meeting. General Hospital spoilers say Nelle could make a threat or two during this chat. She may make some cryptic comments that leave Michael pondering what’s next.

Michael knows how devious Nelle can be. She’ll remain locked up, but Michael will understand that prison walls can’t contain Nelle’s plots. If there’s a way to stir up trouble, Nelle always finds it. Carly (Laura Wright) will undoubtedly want any updates Michael can offer. When Michael’s concerned about something, he can count on Carly to help.

That’s especially true when Nelle’s involved. If Nelle spills any hints to Michael, Carly will want to know every last detail. Perhaps she’ll even meet up with Nelle and score a few clues herself. General Hospital spoilers say the baby swap storyline will heat up in the coming weeks. Michael and Carly will inevitably inch closer to the truth about “Wiley” aka Jonah.

Will Nelle set the next phase of all this in motion? Could her latest appearance mark a major turning point in the story? GH is clearly bringing Nelle back for a reason. She’ll probably serve as a crucial stepping stone for curious Daddy Michael. He needs all the hints he can get if he’s going to figure out his presumed dead son is alive and living with “Brucas.”

Brad (Parry Shen) will do his best to keep the switch under wraps, but that plan will slowly unravel. Lucas (Ryan Carnes) seems poised for heartbreak, so don’t miss the devastating shockers ahead. We’ll keep you posted as other GH news comes in. Stay tuned to the ABC soap and don’t forget to check CDL often for the latest General Hospital spoilers, updates and news.