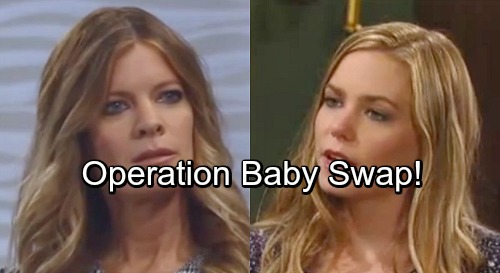 General Hospital (GH) spoilers tease that Maxie (Kirsten Storms) will continue to wrestle with overwhelming grief. She feels pretty stuck at the moment. Maxie knows that Nathan’s (Ryan Paevey) gone, but she’s not sure how to move on with her life. She’ll definitely need more support to get through this.

Peter (Wes Ramsey) is trying to help, but GH fans know he’s too shady to be trusted. Maxie could be asking for trouble if she keeps leaning on him. Nina (Michelle Stafford), on the other hand, is a great person for Maxie to rely on. They’ve had some issues in the past, but they’ve definitely put those behind them. This painful loss has brought them closer than ever.

Maxie recently had a meltdown over her childbirth prep class. It was a difficult reminder that Nathan was no longer around to attend. Fortunately, Nina stepped up to take Nathan’s place. She’s determined to do what her brother would want by helping Maxie. That trend should continue as this hot plot moves forward.

Maxie and Nina were quick to clash with Nelle (Chloe Lanier) during their shared class. GH doesn’t want us to forget about the animosity among these ladies. There’s a good chance that’s going to be important later. General Hospital spoilers say Maxie and Nelle’s storylines will collide with a shocker. It’ll probably involve a baby swap since they’re both pregnant right now.

Nelle tends to be the schemer around town, but could she finally be a victim this time? It would be unexpected and satisfying, so that’s the ideal option here. If one baby’s going to die, Maxie’s might make the most sense. Michael (Chad Duell) and Nelle’s kid would be connected to the Corinthos clan as well as the Quartermaine family. This kid will definitely matter if he or she gets to stick around.

If Maxie’s child passes away shortly after the birth and Nelle’s baby is nearby, someone may switch them. Who would be willing to do that? Nina just might! She’d be desperate to help Maxie avoid additional pain. Nina also hates Nelle, so she certainly wouldn’t lose any sleep over taking her kid.

Once Valentin (James Patrick Stuart) and Peter’s partnership is exposed, that’ll give Nina another reason to head back to the dark side. She might decide she’s going to ignore the consequences and do whatever she wants. This could be an awesome story for all parties involved.

Do you think Nina will steal Nelle’s baby down the road? Is that what Nelle deserves? The truth would undoubtedly come out, but at least General Hospital could give Nelle a taste of her own medicine! We’ll give you updates as other GH news comes in. Stick with the ABC soap and don’t forget to check CDL often for the latest General Hospital spoilers, updates and news.