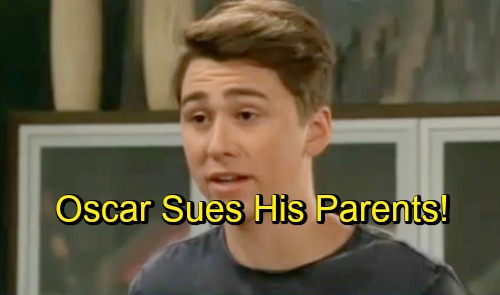 General Hospital (GH) spoilers tease that Oscar (Garren Stitt) will soon take matters into his own hands. He’s been reeling from the news that he has a malignant and inoperable brain tumor. The news that he was dying was bad enough, but he’s particularly upset that Kim (Tamara Braun) and Drew (Billy Miller) chose to keep his illness from him for so long. He feels betrayed and is now feeling distrustful of his parents to look out for his best interests.

The last straw was when he overheard Kim and Drew talking about the clinical trial and their desire for him to participate in it as a patient. Oscar doesn’t feel like he wants to be a patient for the rest of his short life, and he wants to exert control over the life he has left. In a way, he probably feels like his parents owe him some leeway to make his own choice in the matter, since they kept him in the dark about his illness for so long.

So, Oscar paid Alexis (Nancy Lee Grahn) a visit and got a little bit of information about where he stands legally. He wanted to know whether a minor was obligated to do what his or her parents wants when it comes to medical treatment, and Alexis cautiously let him know that in extreme cases, the courts have allowed minors the right to make medical decisions other than what their parents want.

You could practically see the wheels turning in Oscar’s head as Alexis was explaining all of this, and it appears that he may indeed be on the path to taking legal action against Kim and Drew. GH spoilers say that a legal case will bring Alexis into Julian (William deVry) and Kim’s orbit soon. How Oscar will pay for legal assistance remains to be seen; perhaps Alexis will agree to do the work pro bono.

If Alexis does end up representing Oscar, it will surely cause some drama between Julian and Kim. Kim desperately wants Oscar in the clinical trial, and she may put pressure on Julian to get Alexis to not represent Oscar, or to try to talk him out of getting the courts involved.

Unfortunately, any legal action that Oscar takes will likely cause turmoil between himself and his parents. Do you think Oscar will really bring a legal petition against his parents? Stay tuned to the ABC soap and don’t forget to check CDL often for the latest General Hospital spoilers, updates, and news.