General Hospital Spoilers: Robin’s Return Brings Miracle For Oscar – Teams Up With Patrick To Save His Life 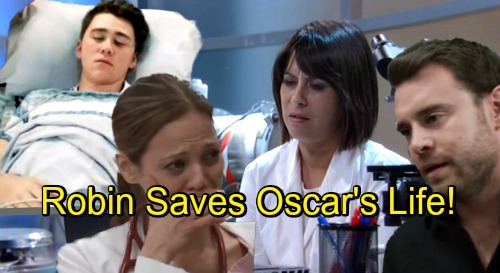 General Hospital spoilers tease that Oscar’s (Garren Stitt) illness isn’t leaving him with much time left. It could be a few months or a couple years…but the fact remains that his time is limited and his tumor is inoperable. But could recent developments in medical science treat the tumor and prolong Oscar’s life, or even destroy the tumor? And could a familiar physician be returning to help treat Oscar?

Before Oscar’s tumor was revealed, it was reported that Robin (Kimberly McCullough) was returning to GH and would interact on-screen with Anna (Finola Hughes) and Peter (Wes Ramsey). And GH spoilers indicate that the three will indeed interact. But could Robin also be returning to consult on Oscar’s case?

It would make perfect sense. Robin has helped out with brain-related issues on GH before. In fact, she developed the medication that Patrick (Jason Thompson) used to save Jason (Steve Burton) back in 2012 when he was experiencing brain swelling and other problems.

Now that Drew (Billy Miller) knows about Oscar’s tumor, he might demand that Kim (Tamara Braun) seek additional opinions and options for treatment. Kim says that she’s talked to every specialist imaginable, but there are probably some options out there that she’s missed. It might just take some thinking outside the box to come up with a treatment for the tumor.

Liz (Rebecca Herbst) also knows about Oscar’s condition, so she might suggest that Kim enlist Robin’s help. Of perhaps Robin will simply appear on the scene to visit Anna and Peter, and she’ll subsequently get drawn into Oscar’s treatment. She may get whiff of what Oscar’s up against and offer to get involved.

Robin could team up with Patrick to perform some life-saving measures on Oscar. So far, there’s no indication that Patrick is returning to GH, but that doesn’t mean that Oscar can’t travel to Berkeley for some combined Robin/Patrick treatment.

Of course, that would mean that Oscar would need to be filled in on his condition, which could get complicated for Kim. General Hospital spoilers tell us that Drew will in fact let Oscar know the truth on next week’s new GH episodes, September 10-14.

Are you excited to see Robin back in Port Charles, and do you think that she’ll end up treating Oscar? Stay tuned to the ABC soap and don’t forget to check CDL often for the latest General Hospital spoilers, updates, and news.