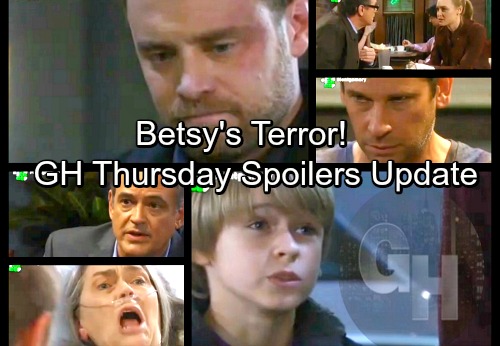 General Hospital (GH) spoilers for Thursday, April 5, tease that Betsy’s (Deborah Strang) in for a shock. Jim Harvey (Greg Evigan) just showed up at GH and his mission is sure to be a disturbing one. It seems he plans to sneak in Betsy’s room to kill her. When Jim appears, Betsy will let out a loud shriek. She’ll fear for her life, so let’s hope someone arrives before Jim can finish the job.

Meanwhile, Drew (Billy Miller) will give Jake (Hudson West) and Liz (Rebecca Herbst) some support. GH fans know that Liz and Franco are taking a breather at the moment. She’s waiting on him to work through his past and get his act together.

Nevertheless, Liz misses Franco terribly. Her boys are just as bummed about Franco staying elsewhere. Jake will mention how much he wants Franco back at the house, so Drew will offer reassurance. He’ll probably acknowledge that Franco cares about Jake and suggest that’s not going to change. Drew has toward toward Franco lately and Thursday’s comments will prove it.

Later, Jim will wreak more havoc. As Jake stands nearby, Jim will whip out a gun and press it against Liz’s back. He’ll insist that they need to come with him if they want to remain unharmed. In Kevin’s (Jon Lindstrom) office, Franco will remain distraught over his hypnosis session. It’s bringing up some painful memories that Franco doesn’t want to address.

Kevin will keep pushing, but it looks like Franco will come out of the trance without the answers he’s seeking. Luckily, more memories will resurface soon enough. General Hospital spoilers say Liz and Jake’s ordeal will put Franco on the path to the whole truth.

Across town, Kiki (Haley Erin) will give Dr. Bensch (James DePaiva) a piece of her mind. She’ll reiterate that the kiss he planted on her was uncalled for. Dr. Bensch will act like Kiki’s to blame for sending him a vibe, but she’ll argue that wasn’t the case at all. Kiki may insist that Dr. Bensch is making this up to fit with his twisted fantasy.

Other General Hospital spoilers say we’ll see more flirting for Julian (William deVry) and Kim (Tamara Braun). These two love their witty banter and sexy stares, but it’s hard to them to consider this a serious romance. Despite their attraction to each other, they’re far more into their former flames.

Kim will open up to Julian about her feelings for Drew soon, so maybe “Charlie” will have some advice to share. For now, Oscar (Garren Stitt) will be happy about his budding relationship with his dad. Drew’s finally in his life and that’s something to celebrate.

When Oscar discusses his joy with Josslyn (Eden McCoy), she’ll be thrilled for her beau. It’s great that Drew and Oscar have found each other at last! We’ll give you updates as other GH news comes in. Stay tuned to the ABC soap and don’t forget to check CDL often for the latest General Hospital spoilers, updates and news.