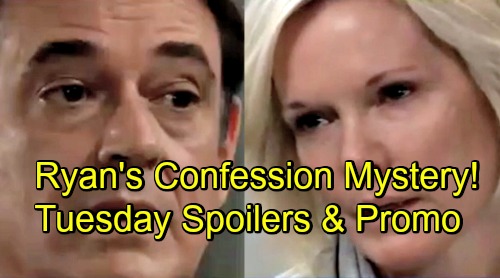 General Hospital (GH) spoilers for Tuesday, December 4, tease that Ryan (Jon Lindstrom) will play a dangerous game. Ava (Maura West) knows that if Griffin (Matt Cohen) didn’t kill Kiki (Hayley Erin), her murderer’s still out there. She wondered who the killer might be, which brought a shocking confession from “Kevin.” He assured Ava that he killed Kiki and he’ll reiterate his claims in Tuesday’s episode.

Naturally, Ava will be confused over “Kevin’s” statement. She’ll suggest that he couldn’t have done it, but he’ll assure Ava that he did. Of course, there’s no way this will be a legit confession. General Hospital is just giving us another one of their usual fake-outs! “Kevin” will undoubtedly spin a story about how he should’ve pushed Ava to make up with Kiki or urged her to be with her daughter on Thanksgiving.

Ava will probably think “Kevin” is sweet for caring enough to blame himself. Little does she know Ryan actually did the deed! Meanwhile, Finn (Michael Easton) and Anna (Finola Hughes) will get some advice. Epiphany (Sonya Eddy) will catch them talking near the desk at GH, so she’ll take the opportunity to weigh in. She’ll think they’re out of their minds, so it’s clear that she won’t approve of their latest plan.

Other General Hospital spoilers say Maxie (Kirsten Storms) will get grilled about her relationship status. Felicia (Kristina Wagner) will realize Maxie and Peter (Wes Ramsey) are closer then ever, so she’ll wonder if love’s in the air. Maxie will panic as she insists it’s too soon to have feelings for someone else. Part of her will still feel like she’s betraying her dead hubby, Nathan (Ryan Paevey).

Felicia may remind Maxie that Nathan would’ve wanted her to move on. Peter may not be Felicia’s first choice, but Maxie’s happiness is what’s most important here. Over with Mac (John J. York), he’ll let Peter know that he’s quite protective of Maxie. If Peter dares to break Maxie’s heart, Mac will make his “life a living hell.”

Peter will assure Mac that he gets the picture. He’ll promise that he truly cares about Maxie and only wants what’s best for her. Across town, Margaux (Elizabeth Hendrickson) won’t want Sonny (Maurice Benard) to think she’s gone soft. She may have backed off, but that doesn’t mean she’s forgotten what Sonny did or how ruthless he can be.

Margaux will warn that all Sonny has to do is make one wrong move and she’ll be all over him. She’ll refuse to let Sonny feel like he’s running the show. At the police station, Jordan (Briana Nicole Henry) and Chase (Josh Swickard) will interrogate Griffin (Matt Cohen). Now that they’ve heard Sasha’s (Sofia Mattsson) side of the story, they’ll want Griffin to spill his version of events.

General Hospital spoilers say Griffin will share the details of Ava’s scheme, but Jordan will still have doubts. Something in her gut will tell her another PC resident’s to blame, so she’ll keep searching for answers. We’ll give you updates as other GH news comes in. Stay tuned to the ABC soap and don’t forget to check CDL often for the latest General Hospital spoilers, updates and news.